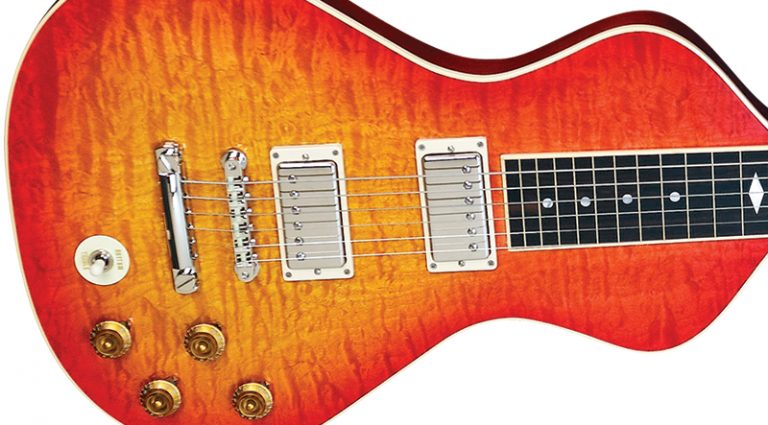 If Nashville is the pedal-steel capital, surely Southern California is a lap steel hotspot. David Lindley and Ben Harper, along with luthier Bill Asher, have taken what some consider an archaic design and put it fully into the public ear.

Harper cut his steel teeth on the Weissenborn, and the Asher Ben Harper Model is Weissenborn-gone-electric. The early Gibson vibe of the chambered, neck-through design is heightened by the finish and binding, TonePros bridge and tailpiece, rosewood fingerboard, Kluson tuners, and Seymour Duncan pickups – all mounted in mahogany beneath prime flamed maple. Visually, the Asher begs to be played.

Tuned to open G and played with a chrome-worn Stevens steel bar, the Harper’s 25″ scale makes the more extreme slanted bar voicings in lower positions a little trickier than on the 23″ scale often found on vintage steels. However, the longer scale makes the Harper feel quite familiar to an acoustic lap aficionado, and easier to play in tune with straight-bar single-note and chord work.

Scale, hollow chambers, prime hardwoods, and quality hardware conspired with the humbuckers (wired with a three-way switch and master tone and master volume for each pickup) for a strong sustain and rich tonality through a late-’50s Ampeg Jet spiced up with a Holy Grail reverb. Kicking in a Seymour Duncan gain stage pedal with the mids boosted and both pickups activated created something akin to Lindley’s voice on Jackson Browne classics. With either bridge or neck pickup selected alone, the Harper launched into a zone where the steel bar, string, and amp/pedal interaction created overtones galore, sustain forever.

Into pristine flame-top LP-style instruments? You want the Asher Ben Harper Model for the visuals. If you’re a steel freak, you want it because the combined Les Paul/Weissenborn characteristics make this looker a uniquely tuneful instrument.