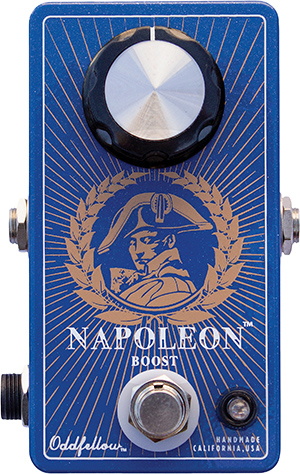 Overdrive is one of the guitarist’s great joys. Unlike flat-out distortion, overdrive is a broad tonal palette, from clean and full to huge and rockin’ – and every shade in between. Oddfellow’s Napoleon Boost aims to give players a simple but powerful overdrive in a small-footprint chassis, which seems to be a popular trend these days.

The unit is compact and tidy at 4.3×2.3×1″. Built in California, it offers a steel housing with a rugged-feeling footswitch and a delightfully large Level knob. Plugged into a 1×12 tube combo, the Napoleon gave new sonic dimension to a PRS Starla with humbuckers and a Fender Stratocaster with traditional single-coil pickups. With the unit activated and the level set at 0, the box even serves as a line buffer to help deliver a strong guitar signal over longer cable distances or through a maze of pedals.

Start inching up the Level knob and the guitar tone becomes noticeably fuller and more interesting as the Napoleon Boost accentuates certain colors in the guitar and amp. From here, you can find a world of tones – fat B.B. King-style blues to rough rock and roll and all the way to edge of hard rock. Our test amp was a Class A-style single-channel unit that can bark on its own, but the Oddfellow boosted that attitude and added more hair to the dog. Conversely, if you had a Marshall, Boogie, or other high-gain amp, the Napoleon Boost could kick its preamp into saturated hyperspace.

Tone geeks, of course, love any kind of “secret weapon” circuitry in pedals, and the Napoleon Boost has a particularly cool one in its guts. Unscrew the back panel and you will spy a Deep switch on the PC board. Activate this DIP switch to kick in an excellent bass-boost that smacks the front of your amplifier for a bigger low end. Depending on where you set the Level knob, this can be fuller, more dimensional tone, or, with a crunchier amp tone, a huge wall of bottom end.

Other goodies include true-bypass switching, 9-volt battery and DC power capability, a bright LED for visibility onstage, and a 2.1mm DC cable that is compatible with most power supplies. Of course, in addition to using the Napoleon Boost as an effect, you can simply leave it on all the time to give your tone more overall flavor and character. It’s a straightforward little box, but has a Swiss army knife array of uses for guitarists, bassists, and other instrumentalists. It’s a pedal that might just save your next gig.