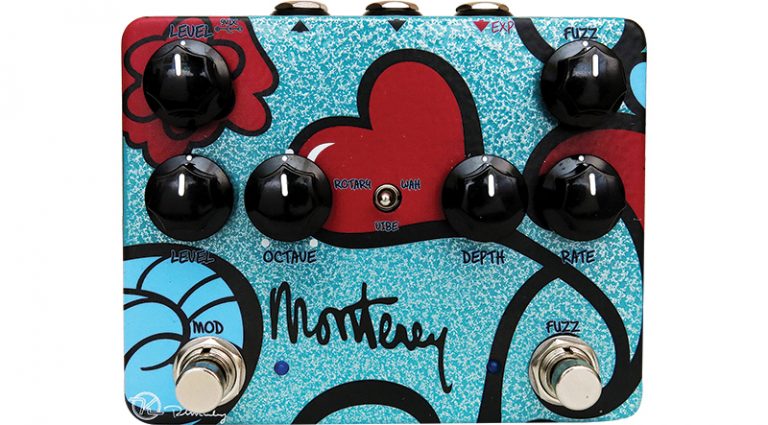 Jimi Hendrix passed into infinity at the tender age of 27. The fact that his influential career lasted only four years over 45 years ago speaks volumes. A visionary former chitlin’ circuit guitarist imprinted the world with his virtuosity and meaningful art.

Robert Keeley has created a tool that allows you to summon the textures (though not the sociocultural impact) that made Hendrix an icon. Made in the USA and running on 9 volts, the Monterey Rotary Fuzz Vibe is divided into two channels: Modulation and Fuzz. A toggle switch on the Modulation side offers Rotary, Vibe, and Wah settings. The fuzz is based on a vintage circuit using NOS Fairchild transistors. Each channel is controlled by global Depth, Rate, and Octave controls.

Connect your favorite expression pedal and it takes over for the Rate knob, controlling the speed in Vibe and Rotary modes. Wah mode replicates a vintage wah, with the Depth control dialing in Manual Wah, Auto-Wah, and Harmonic Trem and Wah. If that’s not enough, a switch inside the unit changes the order of effects.

Played through a blackface amp with a Strat, this workstation wonder provided hours of pleasure dialing in malleable combinations from Hendrix’ sonic palette. The sounds have a domesticated studio persona unlike the real thing. Warm, punchy, and gritty fuzz tones are taken up a notch with deep-phased octave sounds that go up as well as down. All the sounds are sensitive to the guitar’s volume control and to picking dynamics, providing subtlety and additional sounds with nuance and complexity.

Shimmering vibes, lush rotary effects, and a variety of snarky wah tones make the Monterey Rotary Fuzz Vibe a must for the recording enthusiast or Hendrix completist.