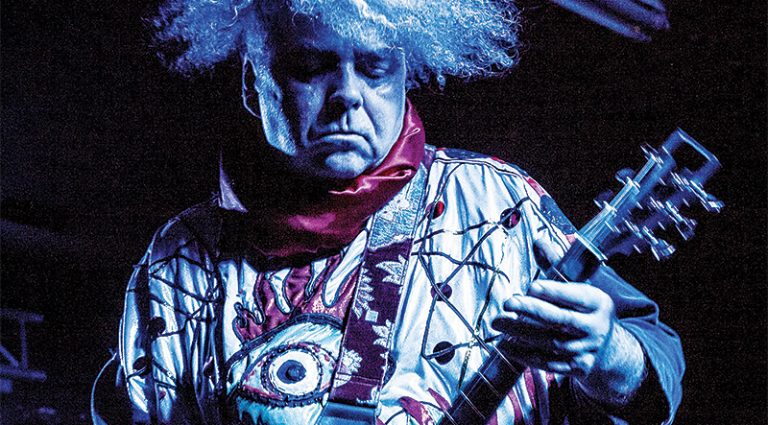 Over the years, fans have come to expect the unexpected from the Melvins. But they just may have outdone themselves this year, with the arrival of two albums – one started nearly 20 years ago and another that features the two main Melvins, singer/guitarist Buzz Osborne and drummer Dale Crover, joined by a host of bass players. Osborne recently gave Vintage Guitar the lowdown.

What’s the story with the two new discs?
One is called Mike & the Melvins: Three Men and a Baby, on Sub Pop. It’s a record we started 17 years ago, that coincidentally, has a bass theme, as well. I play all the low-end bass, the bassist we had at the time, Kevin Rutmanis, plays the slide-bass parts, and Mike Kunka from the bands Godheadsilo and Enemymine, plays the high parts that sound more like guitar. We started that record at the end of the ’90s, and then Mike disappeared. He got hold of us about a year ago and asked if we wanted to finish it, and we said, “Hell yeah!” And then we have Basses Loaded, which has six different players – all bassists. For some reason, 2016 is all about bass.

Basses Loaded includes Nirvana’s Krist Novoselic, with whom the Melvins go back a long way.
I met Krist when he was working at a Taco Bell in Aberdeen, Washington – long before he could buy cars or houses with a credit card! When all that stuff exploded, we lost all contact with him. Fortunately for us, we were able to do one song with him for this record, and it came out really good. He also played accordion.

Did the variety of bassists affect the way you played guitar?
Maybe. I’m a firm believer of letting people do their job. I believed in all these people as far as their ability to play bass. So maybe I didn’t want to stand in their way. So, if you hear some guy doing an amazing riff, you’re not going to stomp all over it. But I don’t know if I would be thinking of the bass part as much as the song, in general. When you play with good musicians, it tends to affect everything you do. It seems like I’ve been blessed my entire musical career with being able to play with guys that were really good. I’ve only ever played with good drummers. The Melvins have really been the only band I’ve ever been in, other than Fantômas. And I didn’t write anything for Fantômas.

People talk about prog rock being complex music, but Fantômas is one of the most complex bands out there.
It was never easy for me to play – I’m not the greatest player in the world. But I’d give it the Pepsi challenge against anything, certainly. When I consider how little we actually rehearsed versus most bands, I think it was extraordinary that we were able to do anything at all.

Which guitars and amps do you use?
The stuff I use in the studio would be vastly different than what I’d use onstage. I’ve never viewed the studio and the live setting as anything even remotely close to one another. I’ve often thought that it ridiculous to view them as being similar, because I never thought our fans were so stupid they’d believe they were listening to a concert while they were listening to a CD. In the studio, it’s pretty much anything goes.

On any given recording or any given record, I couldn’t begin to tell you what was on it. We’ve used so many different things, from combo amps to 4x12s to 15s to a s**tload of different guitars. On any one song there could be five different guitars. Live, I started using a King Buzzo Standard, which is mostly aluminum and made by the Electrical Guitar Company. People go, “I really liked the way your guitar sounded better when you used Les Pauls, like on the Stoner Witch record.” And I’ll go, “Well, what song?” And they’ll go, “Like on ‘Revolve’.” And I’ll say, “Well, I didn’t use a Les Paul on ‘Revolve.’ That was a Jackson and a Mustang, sorry!”

In the past, you’ve described the Melvins as “a heavy metal Captain Beefheart.” Do you still feel that way?
That fits it pretty good. I think a lot of people might miss that, but it’s certainly there. It’s as good a description as I ever thought of.