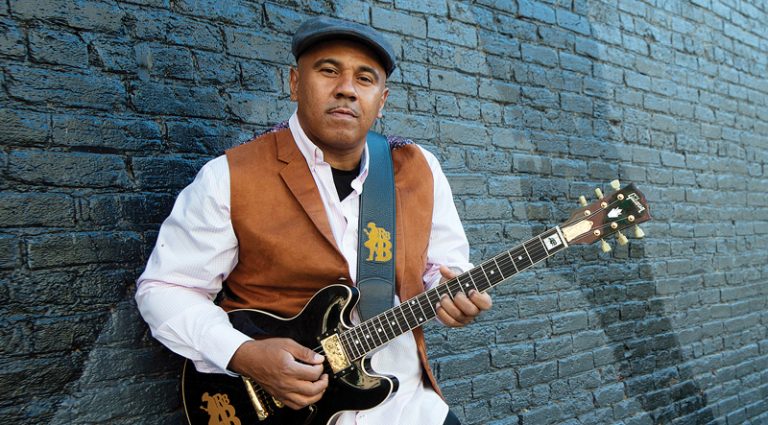 How did you get together with Steve Jordan?

I first met Steve back when he was in The World’s Most Dangerous Band – he did some shows with my dad in the early ’80s. We talked a little at the first Obama inaugural, where actor Jeffrey Wright, who played Muddy Waters in the Cadillac Records movie, put on a Chicago-themed show, but we really reconnected when Steve worked on a Big Head Todd and the Monsters record. I’m cool with those guys, and they asked me to play on a track. I told him, “I’m looking to do another record. Would you mind helping me?” That’s when it happened.

The album has a rich Stax quality.

Steve had that in his mind. He knew I’d recorded in Memphis before, and he loves it down there. The first thing he said once we decided on the songs was, “Put your pedalboard back on the bus. We’re going straight into the amp (laughs).” He’s a walking encyclopedia of gear and music. Once we established the direction, I just jumped in and rode. He has all these great musicians, and they know his work ethic and style. It was a great atmosphere to learn from. He said, “We got your back, just do yo’ thang.” I’m a better musician from the whole experience.

We started recording in January of 2013, and Bobby passed away six months later. I was told this was the last thing he recorded. He and my dad were friends for over 50 years; I used to listen with a radio under my pillow when my mom was asleep. On WVON, they would play blues and R&B. I’d hear Bobby Blue Bland, B.B. King, Johnny Taylor, and Bobby Rush. I never knew I would get the chance to work with them.

When we were in the studio, Bobby came in and started talking to us. It was like school. Even Steve was quiet. It was surreal, and took me back to listening to the radio under my pillow. Right after that, he passed away, and it broke my heart.

What gear did you use?

I have a blond Gibson 335, a Les Paul Studio, a Les Paul Custom, and my first guitar – a ’67 SG my dad bought me when I was seven. My custom 336 is my main axe and I use an ’88 Strat Plus as a backup. I play through a Deluxe Reverb reissue.

When I played in a power trio, I had a big pedalboard, but, I’ve cut it down to an Ibanez Tube Screamer, a Vox wah, a Fulltone OCD, and a Fulltone Fat Boost. When I want overdrive, I put on the Tube Screamer. When I want balls to the wall, I put on the OCD. With the blues, you gotta have dynamics. That’s what makes Buddy Guy the greatest of all time. He can go from a whisper to blasting, and he keeps your attention.

You invited rapper Al Kapone on the record. Are you concerned with blues purists?

I can’t sing about plowing behind a mule or picking cotton. I didn’t experience that. I grew up in Chicago, on the South Side, and was raised between Hyde Park and the Projects. I can’t talk about the things my father and Muddy Waters experienced. What I always wanted to do was be a bridge where that generation could feel what I’m doing, and relate it to young people, as well. That’s where Al Kapone and what he’s doing come in. I grew up when hip-hop started, and I still feel it. Al Kapone is deep, and he’s a musician.

What I try to do is have an authentic feel, but current. It’s always been my philosophy from my first record. Be a bridge. If Muddy Waters had never plugged into a wall, the music wouldn’t have grown. My father always told me and my brother, “Write your own songs and create your own style.” We can always do “Got My Mojo Working” and “Sweet Home Chicago,” but we have to create our own songs, and that’s been my philosophy.