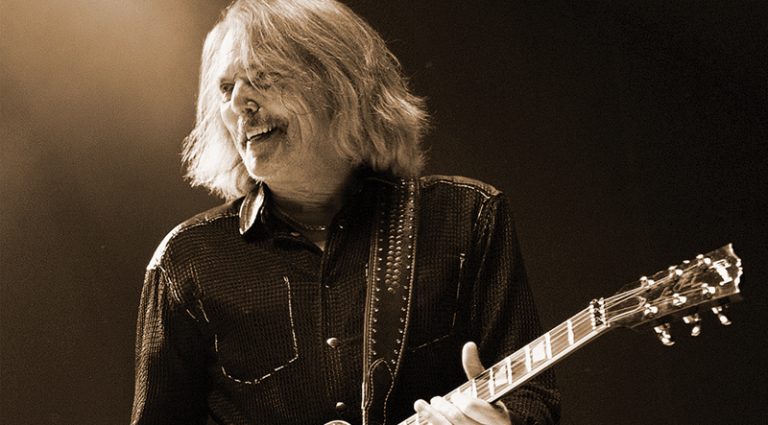 It’s hard out there for a ’70s guitar hero. With the struggles of keeping older fans happy verses the challenge of presenting new material, it can be an arduous battle between art and business. Former Thin Lizzy guitarist Scott Gorham has faced this challenge and stands victorious with Black Star Riders. The band’s third album, Heavy Fire, captures the essence of Lizzy while bringing something fresh and powerful to the stage. It’s a catchy musical recipe.

After the first album, you kind of wonder how something is going to be received and how well the band will write together. We all thought that came out pretty good. On the second one, we’re all used to each other. The second one was a bit better than the first one, and now, into the third one, everybody’s comfortable with the writing style. We know what people can do, what they can’t, what they want to do, and what they don’t want to do. It’s become a better place to be.

There’s a stylistic familiarity that echoes your work with Thin Lizzy, but it’s different enough to stand on its own.

We’re finding our feet. There’s not so much reliance on the Thin Lizzy thing. Departing from Lizzy has freed us. Now we can comfortably take these different musical paths when we want to and not adhere to a certain sound. We can ratchet it up over here, or go left over there.

Even in the Thin Lizzy days, you’d put an album out and you’d say, “What’s going to happen? Are people going to like this?” Each album becomes a personal thing. As soon as you hear criticism, it hurts. You can have a 100 great reviews but it’s always that bad one that you remember (laughs).

Is there a particular song you’re most proud of on Heavy Fire?

I’m proud of all of them, so it’s tough to choose one. A question I get is, “What is your favorite song to play onstage?” When I get to that song, it’s kind of a letdown for me after that. So I don’t have a favorite live song, and it’s the same way with the album. I find it pretty easy to go from track one all to track 10 and not really skip over anything.

Which guitars did you use on it?

My two main guitars are Les Paul Axcess models, one red, one black. I love them. I have a bit of a bad back from carrying heavy Les Pauls all those years, and the Axcess is chambered. They’ve also carved the top edge, so you don’t have that rib damage we all went through with regular Les Pauls.

Isn’t there a noticeable difference in tone compared to the Les Paul you played in Thin Lizzy?

I can hear it compared to my ’57, which I’m still in love with. Unfortunately, it doesn’t get much playing time because I don’t bring it out of storage. The Axcess is pretty close, and the big difference is in the pedals we’re using now. In the Thin Lizzy days, there wasn’t any… nothing any good, anyway.

I get a lot of people who say, “Man, how did you get that sound!?” I tell them, “Les Paul, Marshall stack, and an MXR Phase 90. That’s it. You don’t want to really go for that. Get something else (laughs).”

What are you playing through now?

I’m using a Marshall DSL 100 with two 4×12 Celestion Greenbacks. You can throw it down a flight of steps, get onstage, and it’ll play great. I like a smoother tone, but when it comes to putting a sting on there, it’s changed over the years. I like a high-end that’s more in your face. I use the Dunlop Jerry Cantrell Wah, a Boo Instruments Boost, a Strymon El Capistan Delay, and a Retro-Sonic Chorus.

The stage time has never diminished. It’s the traveling that kicks your ass. And it’s not because of the age thing – traveling has always kicked my ass. You don’t get paid for playing the guitar. You get paid for getting there.

We’ll be touring Europe, then coming back to America and jumping on a tour. We’ll play festivals until the end of the year, ending in Japan. We’ll get lots of air miles (laughs).