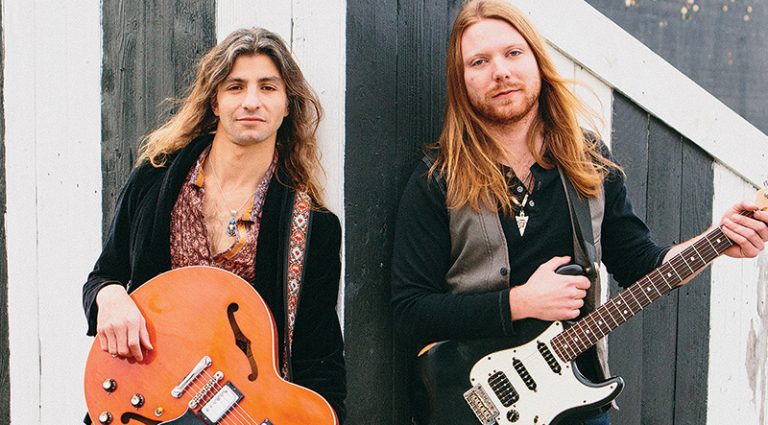 Nashville’s Them Vibes hearken to the two-guitar teams of yesterday. Established by the songwriting duo of front man Brother Love and guitarist Alex Haddad, the band added second guitarist Kyle Lewis after the release of its debut album, Shine On. With the new Electric Fever, Haddad and Lewis display classic twin-guitar sensibilities.

“We have always loved two-guitar bands,” Haddad says. “When you have two guitar players that weave together, it becomes something bigger. Each of our parts is lending to the whole.

“I may come up with a verse, chorus, and main riff, and at that point it’s an open canvas for Kyle. On ‘Who Do You Love,’ Kyle and I finished the harmony riff together, and it becomes the hook. It’s the undisputable thing about having two guitar players.”

“All the harmonies you can do together; you hear that lick and it’s great, and then with the harmonies, all of a sudden it’s a whole new thing,” Lewis added.

“There’s something so glorious about that. You can get very orchestral and musical with it. We push each other and test each other in every scenario,” says Haddad.

“We did a lot of the recording at Dave Kalmusky and Jonathan Cain’s Addiction Studios here in Nashville,” Haddad said. “They have an amazing place, with treasures everywhere. We had things like Sommatone amps and a reissue Tele with that classic chime you only get from that guitar.”

“I was all over the Tele,” says Lewis. “That through an Analog Outfitters Sarge with EL84 tubes. There was also a Gretsch Duo-Jet with a Bigsby I was using quite a bit and that was really hot and fat-sounding.”

“For the longest time, I had a stock Tele,” said Haddad. “Then I found a ’71 ES-335 that is just the sound of rock and roll. It ended up on a multitude of tracks. I also got my hands on a ’59 Les Paul they had at the studio.

“For amps, we used their old Silvertone, Fender Champ, and a ’56 Bassman 2×12 that was amazing. Dave Kalmusky’s dad got it new and there were only 100 made. You turn it up to get the tubes to break-up, then turn up the Bass, and it’s this bellowing noise that’s so warm and powerful. We also had a ’56 Gibson GA-40 brought down by the father of our drummer, Sarah Tomek. You turn that thing up and it’s the growl of the devil.”

“They had a beautiful old Gibson Hummingbird hanging in the studio,” said Lewis. “Alex and I both played it and though Hummingbirds always sound great, they can be hit or miss under a microphone. With this one, though, they struck gold.”

“It was very reminiscent of Beggars Banquet,” added Haddad. “It’s funny with a Gibson; sometimes you put it on your lap and it feels great while you play it, it sounds really good… then you put it on a microphone and you hear its dynamics and all the subtleties from the classic records.

“We also used an old Kay 12-string a friend got at a yard sale. It’s just magic when you mic it up.”

“It’s got a humbucker in the bridge, so it gets a really fat tone when needed, and I have an old Epiphone Les Paul set up for slide,” he said. “My rig is a Fender Deluxe on the dry channel, a Rat Overdrive, Boss delay, and a wah.”

Haddad’s live rig is built on a Fender Prosonic from the early ’90s. “I just love the thing. I bring that, my 335, and my Tele,” he said. “As for pedals, both of us keep it minimal because it’s about letting your hands, your amp, and guitar do the talking.

“Rock and roll is guttural music; it’s hand-to-instrument,” he added. “From Exile to Physical Graffiti and all of Angus Young’s tone, it’s just turned up, not overdriven or pushed by pedals – it’s actually kind of crisp and clean. The Beatles’ white album is one of the greatest guitar records ever made, and it’s just gnarly guitars and gnarly amps.”