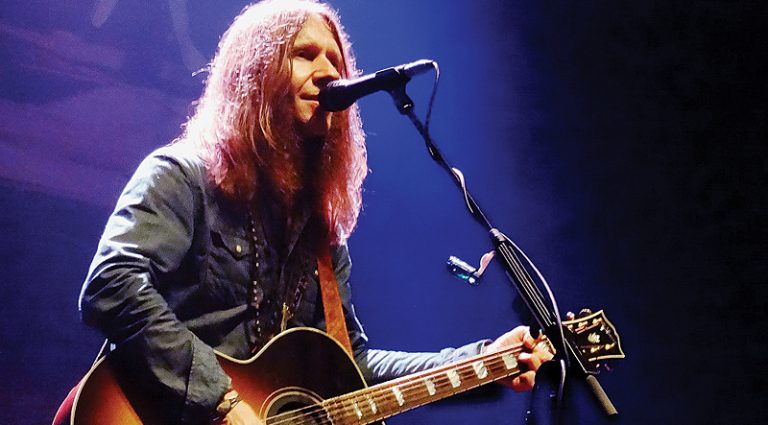 By sound and association, Blackberry Smoke walks a fine stylistic line. A good ol’ rock band when it started rollin’ in Atlanta 15 years ago, its following has more recently grown in front of crowds gathered to see headliners like country superstars Zac Brown Band and Eric Church. So, it sort of made sense that Smoke’s latest full-length studio album, Holding All the Roses, debuted at #1 on Billboard’s Country chart, even if it’s very much a rock record.

The band’s forté is jams in the vein of early-’70s Rolling Stones, Georgia Satellites, and Black Crowes, but on its new EP, Wood, Wire, and Roses, frontman Charlie Starr channels his folk heroes on acoustic versions of five songs from Holding along with a cover of a Tom Waits folk-waltz. We caught up to discuss its twists.

What was the inspiration behind unplugging for Wood, Wire, and Roses?
When we finished Holding, we decided to record acoustic versions of a few songs to offer as bonus tracks, since there was only one outtake from the album. Initially, we’d planned to record three, but there was a little magic in the air that day and we captured six, then decided to offer them as exclusives for Record Store Day.

I wrote and demoed the songs mostly on acoustic guitar, then we recorded big, loud versions for the album, only to turn around and deconstruct them. I love it.

How does songwriting work for you?
Not too long ago, I’d scribble lyrics on napkins, cigarette packs… whatever was handy. I’ve always been pretty good at remembering melodies and riffs, so I never really carried a recorder, but I do take an old notebook everywhere.

The arrangements on WWR stay close to the original…
We adhered to the basic arrangements to showcase the songs, but changed it up a bit as far as instrumentation goes. Brandon [Still] played mostly acoustic piano instead of B3 and Wurlitzer. Also, Brit [Turner] didn’t even play a full drum kit – just percussion and shaky, rattly things. We’ve always been a “less is more” band; like Tom Petty said, “Don’t bore us, get to the chorus.”

You also stayed true on Tom Waits’ “Old Shoes (and Picture Postcards).”
Being a huge fan, I’ve always wanted to record one of his songs, and this seemed like the perfect opportunity. As for the arrangement, well, I wouldn’t wanna hear that song any other way, really.

Which other singer/songwriters have had the most pronounced influence on you?
That list is long: Townes Van Zandt, Guy Clark, Jerry Jeff Walker, Billy Joe Shaver, John Prine, Willis Alan Ramsey, Steve Earle, Lowell George, Bob Dylan, Nick Drake, Burt Jansch, Neil Young. Hank Williams was the ultimate singer/songwriter; he wore his heart on his sleeve like no other.

They all inspire me to try to write better songs, not just cookie-cutter garbage.

Given the band’s road-dog status, when it comes time to record, are second runs/re-takes few and far between?
We genuinely love making music together. For that simple reason, I think, we work quickly. There’s no feeling like tracking a song and everyone’s grinning from ear to ear because it’s right there in the pocket.

Which instruments did you, co-guitarist Paul Jackson, and bassist Richard Turner use to record WWR?
Richard used a Martin BCPA4 and an upright. Paul used an early-’70s Martin D-28. I used a ’48 Martin 000-18, a ’64 Gibson LG-O, National Estralita Resonator, and a Dekley D-10 pedal steel.

Did you rely strictly on a DI/mic’ing, or were amps involved?
The only amp was an old Silvertone Twin Twelve for the pedal steel, believe it or not. The bass was DI’d, but we used mics on the guitars.

How about amps?
Paul mostly used a brownface Fender Pro and a Marshall JMP Master Model, and I used an early-’50s tweed Super, a Silvertone Twin Twelve, a Supro Super, a ’68 Marshall plexi, and a Bluesbreaker.

How did producer Brendan O’Brien most influence the album?
He’s a great producer, great musician, and he knows the sounds needed for this kind of music. He brought more variety in tones – more light and shade. I love his treatment of vocals. And, of course, guitars galore.

What’s next for the band?
I’ve got the next album nearly written and we’re discussing where and when to record it. We hope to get back into the studio soon… unless Tom Petty or the Stones ask us to go out on the road. See… that’s how rumors get started!