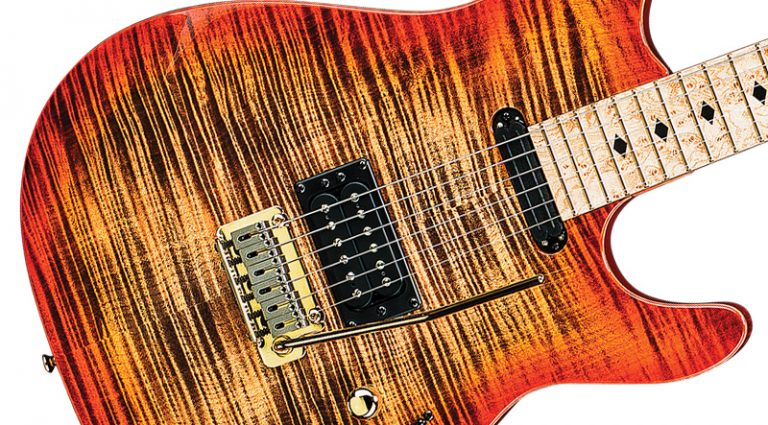 After decades of jumping from one guitar manufacturer to another, Greg Howe recently began working with Carvin (more specifically, Kiesel) on a signature guitar.

Carvin passed manufacture and sale of its guitars and basses to Kiesel Guitars. The reason for the change isn’t immediately obvious, though it makes more sense if you know that Carvin was founded in 1946 by the late Lowell Kiesel. His offspring are responsible for the split, citing the need for “greater growth.” The companies continue to operate under one roof.

Constructed in Carvin’s Custom Shop, the GH24 Greg Howe Signature is an offset double-cut with polarizing looks and performance-friendly appointments. It sports a 25.5″ scale; 24-fret, five-piece maple neck; birdseye-maple fretboard; and a semi-flat 20″ radius. Featuring a dual-action adjustable truss rod, the neck also has a tung oil finish for effortless playability, as well as a sculpted heel that provides unrestricted access to the 24th fret. The neck also boasts jumbo gold EVO frets, and black acrylic diamond inlays. Matching gold hardware, including locking tuners, is fit for a king, while the bridge and vintage-style tremolo is proprietary and built to create increased sustain.

Howe requested a chambered alder body to offer more resonance and to offset the brightness that comes with an abundance of maple. The choice of a chambered body also imparts a slightly warmer sound and is, of course, lighter in weight. At 6.7 pounds the GH24 is easy to play and easy on the back. The body, with its flamed maple top and natural body binding is finished in what Kiesel calls California Orange Burst. It has a tangy eye-catching look – photographs don’t do it justice.

The Greg Howe Signature Parallax bridge humbucker has an Alnico V magnet for extra clarity, warmth, and openness. The Kiesel Parallax neck pickup was designed with the same idea in mind, but calibrated for the neck position under Howe’s supervision. Touch responsiveness was a big factor in crafting these pickups. With the help of a user-friendly five-way pickup selector and master Volume and Tone controls, the GH24 is the physical embodiment of Greg’s tonal recipe. So with an arsenal of amps that included a Carr Bloke, a Magnatone Twilighter, and a Bogner Goldfinger, it was time to get down to brass tacks.

Plugging in, you immediately realize that the GH24 is a conduit for your hands and your amp. Its tone is light and airy, and it doesn’t present the sometimes overbearing personality traits found in other guitars. While it still maintains a hybrid Stratocaster persona, the GH24’s character offers more flexibility and better reflects what you plug into. It lacks deep bass and supersized mids in favor of a smooth, clear, and earthy sound that directly echoes the amp’s personality and the player’s hands. It never, ever sounded thin or tinny in testing.

The bridge pickup has plenty of articulate bite and harmonics without being piercing or overly distorted. These pickups have an organic, woody quality that could be too subtle for some, especially if you’re accustomed to a huge contrast between a sizzling bridge pickup and a warmer neck position. The lack of bottom in the neck position might leave some guitarists wanting more, but this guitar never gets muddy – and you can always get more bass by tweaking your amp. The three positions between the pickups are the most fun, as smooth bubbly Strat tones meet in-between-position Tele cluck. These also happen to be the sounds that Howe has favored on his last few releases.

The GH24’s neck is great for athletic runs, acrobatic hammer-ons, and precision chording, and its slightly wide aspect grows on you. While the clean sounds are spectacular, the guitar excels with metal saturation or bluesy grit and thrives in a live-band mix.

At the end of the day, the Carvin GH24 Greg Howe is easy to play, lightweight, and has a nearly transparent, punchy quality that gives back whatever you put into it.