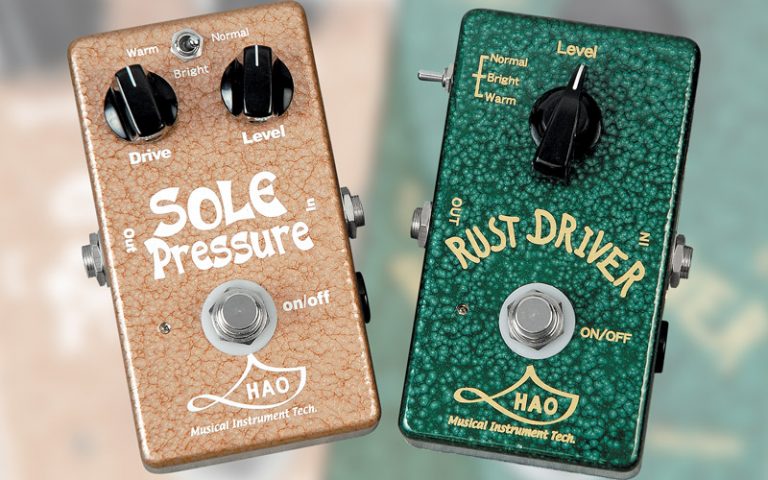 For nearly 20 years, Japanese electronics distributor J.E.S. International has been providing gearheads in its country with guitars, amps, and pedals – imported and domestic.

In 2000, the company moved from merely distributing gear to actually making it. Key to the transition was the arrival of a group of engineers who spent several years designing digital signal processor (DSP) algorithms and developing acoustic guitar preamps for some of the biggest names in the music industry.

When those engineers hired on at J.E.S., the subsidy HAO Musical Instrument Tech was born with the express purpose of making high-quality, hand-built guitar effects pedals and today they make five overdrive/boost pedals designed to replicate various forms of classic vintage amplifiers.

HAO recently invited us to have a go with their newest creations, the Rust Driver and Sole Pressure boxes. Each pedal measures a convenient 4.5″ x 2.5″ x 1.75″ which means they don’t suck up a whole lot of space on a pedalboard.

The Rust Driver is designed to emulate the sounds of a certain late-’60s British amplifier with a plexiglas faceplate. On first glance, it seems about as meat-and-potatoes as you can get, with just a Level knob for controlling the pedal’s signal output. The unit’s distortion is adjusted using a three-way mini-toggle switch labeled “Normal/Bright/Warm.” A 9-volt DC power connection is located on the side.

We tested the HAOs using a Fender American Strat and a PRS Custom 22 running into a Gabriel Sound Garage Voxer 18 amp.

Setting the amp clean with just a hint of breakup and the Rust Driver’s mini-toggle set to Normal, we rolled the Level back to 10 o’clock. Hitting a chord on the Strat produced a very nice, transparent rhythm tone. Dialing up the Driver’s Level control, we could hear the plexi overtones start to emerge, along with a nice balance between pedal, guitar, and amp. Moving the toggle to the Bright position, we were instantly greeted with a beautiful British-style lead tone, especially through the neck pickup.

Switching the pedal to the Warm position and moving the pickup selector to the middle gave a fantastic, bluesy lead tone.

Switching to the humbucker-equipped PRS, the pedal didn’t appreciably muddy-up the tone, as so many overdrive pedals are apt to do. Strummed chord sounds remained very articulate. The Normal position gave a very basic British overdriven tone, while the Bright setting really made the guitar stand out, especially as we switched through pickup configurations. Rolling off the guitar’s Volume knob didn’t affect the tone of the pedal, either. We could clean up the tone and retain the separate dynamics of the pedal and amp.

The pedals Warm setting arguably produced the greatest variety of tones with the PRS, from a nice jazz-style tone to a deep, overdriven lead tone, by just rolling back the Volume on the guitar. The Level control gives this unit a ton of flexibility. It does a fantastic job, without playing favorites to humbuckers or single-coils, especially when you consider it has fixed distortion settings.

The Sole Pressure is a low-frequency booster that designed to produce the type of tones that make 6V6-driven amps so desirable.

The pedal’s layout is very similar to that of the Rust Driver, with a knob for controlling output Level, three-way toggle, and 9-volt DC connection. But this one adds a Drive setting that allows the user to control the amount of distortion in the mix.

To test it, we plugged it in between a Fender Highway 1 Telecaster and a single-speaker Gibson GA-15RV combo. With the amp’s controls and the Rust Driver’s Level set at unity and the toggle set at Normal, the pedal produced a tone very reminiscent of an old Fender Bassman. The guitar sounded full and deep while maintaining the integrity of the amp’s signal. Rolling the Drive back gave a very nice clean boost with a variable amount of gain.

Moving the Drive up, we could hear a nice, soft overdrive, and moving the Level to match the Drive really brought the amp to life. Switching the toggle to the Bright position made the sound of each string more pronounced while still sustaining the note. Cranking the Drive and Level gave the amp that 6V6 tube tone reminiscent of tweed amps.

Setting the toggle to Warm covered the tone with a pleasing mellow, fat blanket. And with further experimentation, the combination of the Drive, Level, and toggle switch give this box nearly limitless options.

HAO’s Sole Pressure and Rust Driver pedals do a great job of re-creating the feel and tones they were designed to make. Those who play through a basic production tube amp will enjoy the lead overdrive/boost tones they produce, and those who roll with a vintage or high-end boutique amp will discover a plethora of pleasing tones through either or both of them. – Jason Lee Austin