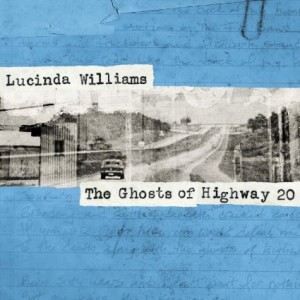 From Bobby Troup’s “(Get Your Kicks On) Route 66” to Bob Dylan’s “Highway 61 Revisited” and more, the roads we’ve traveled have inspired our music. Enter U.S. Highway 20, stretching 1,500 miles across Alabama, Mississippi, Louisiana, Texas, and points beyond; Lucinda Williams calls it a map of her life.

As she says in presenting the album, driving 20 between shows, she was continually haunted by a sense of déjà vu, passing by sights and signs from throughout her life. These visions percolated in her head “and the songs just came.”

Williams has always been a songwriter famed for personal tunes, but this new album comes across the airwaves like a true autobiography. And thus it should be little surprise that it’s both more somber and mournful and sometimes – although, rarely – more jubilant than her other albums.

And yes, Williams is obviously on a hot streak. She’s famous – and to some, infamous – for taking her own sweet time crafting an album until it’s just the way she envisions it. She just came through with her first double-album, 2014’s tour de force Down Where the Spirit Meets the Bone. Who would have expected a second twofer a year later?

Williams has always appreciated great guitarists, and so for such an autobiographical work it’s no surprise that guitars feature prominently here. On many of the 14 tracks, she’s backed by Bill Frisell as well as co-producer Greg Leisz. Combined with her own acoustic and electric playing, the sound is rich and atmospheric with guitars.

On the opener “Dust,” the interplay between Frisell and Leisz is stunning. They layer rhythm riffs and solos atop each other, echoing licks, building the mood with textures of twang. For the dark-souled gospel tune “Doors Of Heaven,” Leisz’s slide snakes throughout Frisell’s fretted lines, at times like a heavenly choir, at others like a lowdown Delta bluesman.

On two tracks – “If There’s A Heaven” and the title song – Leisz is joined by guitarman Val McCallum (Jackson Browne, Sheryl Crow). Throughout, William’s regular rhythm section of drummer Butch Norton and Bassist David Sutton hold down the bottom end.

This may seem to be a singer/songwriter autobiography, but it’s also a powerful guitar album. Between these two aspects, it’ll leave you breathless.