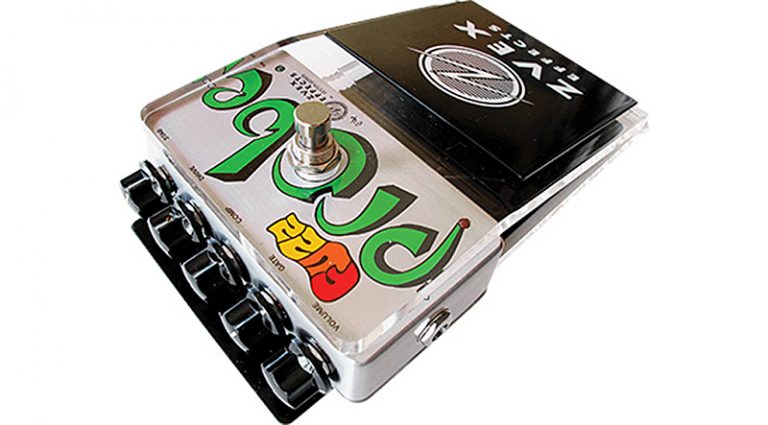 The Z.Vex Fuzz Factory pedal unleashed sonic possibilities ranging from a horde of wasps to the (presumed) sound of the end of the world and became a go-to stompbox for extreme-rock and heavy metal guitarists.

The company’s latest twist, the Fuzz Probe, takes the Fuzz Factory and adds a Theremin-like proximity control, giving its user the ability to override the traditional knob-controlled potentiometer with a hands-free “antenna” that allows adjustment of the fuzz on the fly.

The Theremin was a pioneering electronic synthesizer, created by Russian emigré Lev Theremin and built by RCA in the 1920s and ’30s. Above all, it was one of the first instruments played without being touched; the player’s hands interrupted the Theremin’s electrical field, which adjusted its pitch and volume. It was perfect for sci-fi movie soundtracks, electronic avant-garde-iness, and various Led Zeppelin tunes.

On the Fuzz Probe, the proximity control is controlled by the foot – though it can be jerry-rigged to operate with hands, guitar neck, forehead, or whatever.

Like a wah, tone, or volume treadle pedal, the sound is adjusted with the rocking of your hoof. But, since you’re stomping down on air here, as opposed to a spring-control mechanism, more finesse is required. Or not. You can go from mild to wild with a twitch of your big toe. The method is both good and potentially problematic; the Fuzz Factory was notoriously peaky and squealed out at certain settings. That means bulky Doc Martens or tooled-leather boots may not be optimal with the Probe. Instead, heightening one’s foot motor-skill strength and fine-tuning their coordination will help make it a blast.

The Fuzz Probe has five control knobs; Volume, Gate, Compress, Drive, and Stability. They can move its sound from a high-compression fuzz (by trimming the Gate setting) to a ripping Velcro fuzz (by opening said Gate). The proximity plate controls the Stability’s oscillation, which determines feedback pitch. Build sensitivity in your sneaker and you can get a subtle tremolo effect – fast, slow, or warbling. Swing your toe from side to side for a crazed phaser sound.

The Fuzz Probe is best when you let it go wide full open, and it can make a standard fuzz pedal or wah seem so yesterday.

This isn’t a pedal you’ll find essential to your country, jazz, rockabilly, or blues repertoire. It ain’t subtle – but your control over it can be if you learn to move your foot just right.

Z.Vex pedals are hand-built and custom-painted in the U.S.