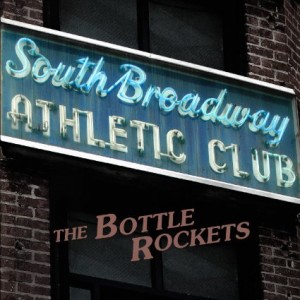 The Bottle Rockets return with their first studio LP since 2009, and it’s yet another terrific gumbo of power-pop, burly rock, and alt-country – a collection of mostly sub-three-minute gems featuring lyrics liable to leave listeners grinning like mules.

The closer “Shape Of A Wheel” (“I’m a wheel no matter what shape I’m in”) offers particularly good examples of frontman Brian Henneman’s well-known talents for wordplay, but the whole album abounds with songcraft.

Opener “Monday (Every Time I Turn Around)” is a jangly ode to time’s swift passage, while “Big Fat Nuthin” (“My idea of recreation/Is brain-dead flat-line vegetation”) merges a singalong chorus with workaday drudgery. “XOYOU” is pure-pop bliss of the Nick Lowe/Dave Edmunds ilk, while “Dog” (“I love my dog… sometimes it’s just this simple”), a toss-off in lesser hands, manages to be bouncy and moving at the same time.

Reenlisting their longtime producer Eric “Roscoe” Ambel (Joan Jett, the Del-Lords), the BRox took several months to record in their hometown of St. Louis (a first). This is certainly well-crafted as a result, but it lacks none of the immediacy or charm that have helped the Bottle Rockets retain inveterate fans and attract new ones for 24 years.