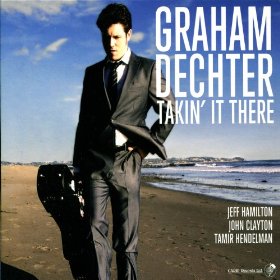 It’s always a treat when a young player arrives on the scene with an understanding of what came before him. Dechter is a traditional jazz player who lets us know right off the bat that he gets it by offering a swinging version of Wes Montgomery’s “Road Song.”

Not content to just hang with the original melody, although he represents that wonderfully, Dechter supplies a solo that darts through the changes with single-note ease before he throws in some Wes-like octaves and block chords that would surely meet the master’s approval. The rhythm section sparkles. Veterans John Clayton on bass, Jeff Hamilton on drums, and Tamir Henderson on piano are the perfect backing for Dechter’s fretwork.

Many of the songs here are covers. Barney Kessel’s “Be Deedle Dee Do” gets a bluesy take that ﬁnds Dechter’s solo showing a player mature beyond his years. It’s soulful and tasty. The chestnut, “Come Rain Or Come Shine,” features a blues intro before it makes its way to the familiar melody. A swinging solo from the guitarist builds beautifully as he leaves hints of the melody throughout while still forming an imaginative improvisation.

There are a couple of Dechter originals on the record that show him taking the music different places. “Together & Apart” is a melancholy ballad with solos from Dechter and Henderson seeming to imply both ends of the song’s title. The other original, “Amanda,” is part of a medley with Cole Porter’s “Every Time We Say Goodbye.” Again the guitarist writes a gorgeous ballad that is in contrast to the swing delivered on the covers.

Dechter should be on the scene for many years to come. Only in his twenties, he shows both a skill and maturity that many players don’t ﬁnd until middle age.

This article originally appeared in VG‘s Jan ’13 issue. All copyrights are by the author and Vintage Guitar magazine. Unauthorized replication or use is strictly prohibited.