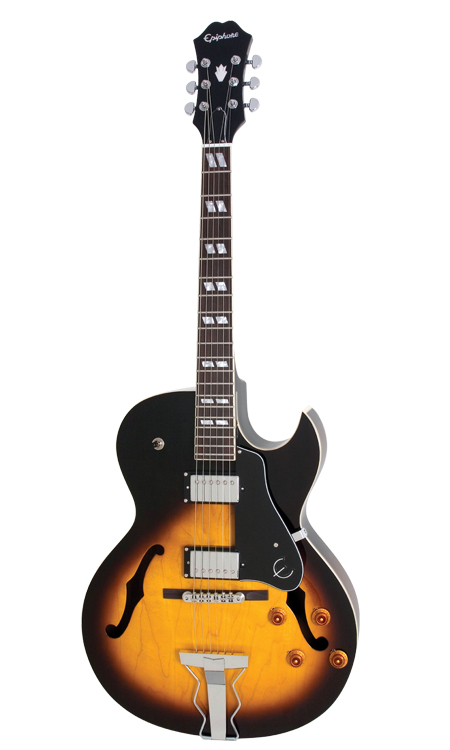 There are plenty of affordable hollowbodies on the market, but Epiphone’s recent reissue of the Gibson ES-175 is almost a slam-dunk out of the box. Whether your guitar guru is Joe Pass, Pat Metheny, or Steve Howe, there’s a historical aura to the 175 design that transcends categorization. In that light, Epiphone has an instant advantage before you strum your first Gmaj7#13 chord.

For materials and construction, the ES-175 Reissue has a laminated maple top, back and sides, along with a 243/4″-scale mahogany neck. The fingerboard is rosewood and sports 20 frets, along with the 175’s classic “split parallelogram” inlays. The nut width is 1.68″, and both the body and neck are bound. The guitar’s hardware is chrome, including the tuners (while the Gibson has Kluson pearloid tuners), and the zig-zagged tailpiece is also a different design from the elegant original. Add to that the Epiphone headstock and the big Epi “E” on the pickguard, and you have most of the cosmetic differences between the two guitars covered. Other features of note are the Alnico V Classic humbuckers, gold tophat knobs (two Volume and two Tone) and a lovely vintage-sunburst finish.

Unlike some Epiphones, which can have chunky necks, the ES-175 Reissue’s is slim and fast. This, coupled with its low fretboard action and light strings, suggests the Reissue will appeal to rockers, while jazzers and blues players may install heavier flatwound strings in a jiffy. One cool aspect of the ES-175 design is its extra-deep body, which has a large heel at the 15th fret. This may seem like a disadvantage to rockers accustomed to soaring in the upper ranges, but actually, it encourages players to focus on the lower ranges where you can find sumptuously warm, woodsy tones. This is the ES-175’s sweet spot and, on the Reissue, works to perfection, especially on the neck pickup. The Alnico V Classic pickups are full and warm, too, adding to the jazz and blues vibe. Of course, the ES-175 also has a bridge pickup, which evokes a funky, twangy range of tones when coupled with the hollowbody design (for a demonstration of the 175’s bridge-pickup range, listen to Steve Howe on The Yes Album from 1971). Dial up the gain further and you’ll find some fat, commanding rock tones. Again, versatility is not a problem for this Epiphone.

As for construction, the ES-175 Reissue has generally good craftsmanship. As previously noted, the finish is stunning, though you may find one or two blemishes in the maple grain below. The binding looks good, but our test guitar had one sloppy glue joint in its binding by the cutaway tip. If this was a $3,500 Gibson, it would be a point of concern, but it’s not so much on a mid-price axe. Also, the guitar is a hair on the heavy side compared to other import archtops, but it’s only a consideration if you specifically have a physical issue or a preference for extra-light guitars.

The ES-175 Reissue is a classy, stylish guitar that says “vintage jazzbox” on the outside, but with its fast neck and punchy pickups, rock players will dig it, too.