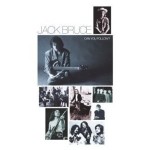 Jack Bruce may be best known as one third of Cream. A brilliant and prolific composer who dabbled in jazz, rock, folk, and world music, Bruce was more known for his busy approach to bass playing. Equally at home on piano, where he composed much of his recorded output over the years, and adept at bowed instruments, he’s also a passable guitar player.

This new six-CD box collects the best from 30 years of Bruce’s career – the early jazz, rock with Cream, his early solo work, and his prolific (though lower-profile) output that followed. Along the way, he has worked with many of the greatest names in rock and jazz. His compositions may not be the most accessible, but they’re never boring, with twists and turns, unexpected tempo changes, and his sense of melody is enhanced by fine vocal ability.

This article originally appeared in VG’s Mar. ’09 issue.  All copyrights are by the author and Vintage Guitar magazine.  Unauthorized replication or use is strictly prohibited.