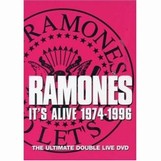 Blue jeans torn out at the knees, Converse All-Star high toppers, leather jackets, and low-slung Mosrite guitars – punk never looked or sounded so good as with the Ramones.

Now comes It’s Alive…, a two-DVD set paying ear-splitting homage to America’s first family of punk. And this could just well be the ultimate Ramones greatest hits set of all time. Here, is live footage of the boys playing 100 of their best songs.

The first DVD kicks off with the original lineup at CBGB in 1974, blasting through “Now I Wanna Sniff Some Glue” at full, rip-roaring volume. It doesn’t let up until four hours later with a final version of “Blitzkrieg Bop” on stage at the River Plate Stadium in Buenos Aires, Argentina, in 1996.

Along the way, there’s footage of shows from England, Germany, Sweden, Finland, and Italy to the best dives Gotham had to offer, including several shows at CBGB and Max’s Kansas City. All of the Ramones’ classics are here: “Sheena Is A Punk Rocker,” “Beat On The Brat,” “Rockaway Beach,” “Cretin Hop,” “Rock’n’Roll High School,” “Pinhead,” and even their high-speed cover of “Surfin’ Bird.”

You’ll feel as though you’re knee-deep in beer again and your ears won’t stop ringing for a week. Just like in the good old days when punk was born.