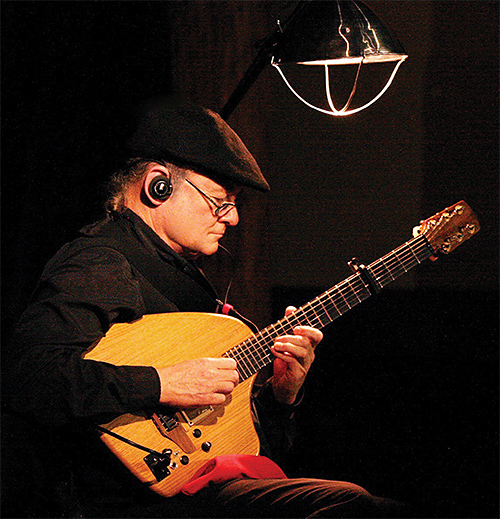 On “Marco’s Bounce,” you put a piece of foam under the strings to create a percussive effect.
I owe the foam trick to [Brazilian guitarist] Marco Pereira. It’s a great idea for practicing on an acoustic because it allows a player to pick as soft or hard as they like without upsetting neighbors or getting chucked out of a hotel. I use a piece of old packing foam and squash it against the bridge on the playing side.

What guitar do you use on “Toot Toot?”
My main guitar, made in 1995 by Bill Puplett. The pickup was made by Steve Blucher, at DiMarzio. I needed a pickup no more than six millimeters deep so I wouldn’t have to cut into the guitar’s box. It’s stuck with carpet tape, and a mounting ring stops it from sliding about on its tack. For most of these recordings, I ran the signal though my pedalboard and into a stereo recorder on my elderly laptop, so all the shaping, gain structure, and delay is done with my pedals.

“Hacked Off Boogie” is reminiscent of your younger days as an electric guitarist.
I had a Gretsch for a while, but it got stolen. Then I had a Tele I traded in for a Martin-016NY. On electric, I played country music, at first, which fired me up with the discovery of guitar life outside the pentatonic scale, and introduced me to steel guitar. I sometimes played in Irish pub/function bands, where either you played something or you didn’t get paid. After the Tele, I used cheap electrics for pub gigs, then started getting work at the BBC with the acoustic.

Describe the guitar sounds you heard in Britain, before the Beatles.
When I was a boy, the guitar was strictly forbidden, so guitar music was an illicit affair involving a crystal-radio set under the bed clothes. I wasn’t a part of the skiffle scene – it didn’t attract me. But, when I heard the Shadows… oh boy, what a sound! Clear and shiny, full of tone, and that little twist in the echo trail. There were snippets of others – The Ventures and Lonnie Mack – that infrequently came through on Radio Luxembourg and imprinted on my psyche.

When did you hear Merle Travis and Chet Atkins?
What little I did get was second- or third-hand, mostly by seeing other guitarists around the working men’s clubs in Liverpool. That was enough to get the bare bones of alternating-thumb bass notes and the banjo roll.

What kind of compressor do you use?
I did a tour with Joe Satriani that was engineered by Randy Lane, and I picked his brain as much as I could. He liked big Avalon tube compressors in a rack, which gave me the idea to seek tube compression in something smaller. Eventually, I found Phil Taylor of Effectrode and, after some discussions and suggestions, got to try his prototypes with the sub-miniature tubes. He refined the design into the PC-2A, and its compression is very high-quality – beautifully smooth and transparent. And, thanks to the nature of tubes, it helps get rid of that nasty piezo-pickup spike.

What gear are you using on tour?
It’ll be the Bill Puplett guitar and a small pedalboard. I also have a little ZT Junior lunchbox amp, which gives me consistent monitoring without heavy lifting. Pedals are the Effectrode Helios tube fuzz, the PC-2A, a JAM Dyna-ssor compressor; an old Boss GE-7B bass EQ recently restored by Pedalmods U.Kl, the rare Boss VB-2, a Cusack Tap-A-Whirl tap tremolo and Sweet Verb, and a Wampler Tape Echo.

What’s your take on the trend of playing percussion on the body of the guitar?
I think that what makes American guitar so special is that it adapts across divergent cultures and disciplines to its users’ needs. The rhythmic thing isn’t actually new; it was always used in flamenco and now and again, an old film surfaces showing an old American guitarist doing the same thing.

Guitarists must constantly ask you for tips. What’s the first tip you give them?
Throw away that nasty bit of plastic and see all the things you can do without it!