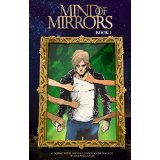 Dan and Leland’s forth album is a soundtrack to their graphic novel of the same name. Book One is the first four of 12 chapters, and comes with a 12-song CD that follows the entire series. Sounding more like a killer roots-rock record than a soundtrack, the album forgoes orchestral elements for evocative lyrics, superb band chemistry, and poignant subject matter.

Dan Franklin and Leland Jackness swap guitar duties throughout, with Franklin handling most of the vocals and fronting a fiery rhythm section.

The story involves a troubled young man who meets a mysterious stranger who talks him into leaving the love of his life to seek his destiny. The journey unfolds as our hero is confronted by life’s eternal questions, shady characters, philosophy, spirituality, and wisdom.

It might be difficult to read the graphic novel while listening to the lyrics, but the accessible pop rock meets Americana of “To Feel Alive,” “Slow Down To Nowhere Fast,” and “Voltage” stays in your head. There’s inspired soloing, earthy textures, and rocking guitar playing without an ounce of excess.

This is an ambitious effort that succeeds as a graphic novel and a very fine album.