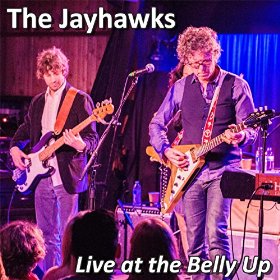 Recorded in January 2015, this digital-only live show captures the legendary Minneapolis alt-country outfit’s 1997 lineup running through chestnuts from throughout their catalog, including some of their more decidedly un-Americana tracks.

Lead guitarist and vocalist Gary Louris sounds more effortless than ever, channeling Crazy Horse ferocity, but his vocals are revelatory. A quarter-century or more beyond the original release of some of these songs, Louris feels that much wiser, effectively giving the material new dimension.

Those skeptical of Mark Olson-era classics sans Olson need not fret – Louris, drummer Tim O’Reagan, and keyboardist Karen Grotberg pull off a flawless “Blue,” for example. “Waiting For The Sun” is tougher than the original, and “Ain’t No End” from 1989’s Blue Earth could send The Band on the run.

Elsewhere, Grotberg’s reading of Harlan Howard’s “Down To My Last Cigarette” is a highlight, while Jessy Greene, the Hal Blaine of alt-rock violinists, and John Jackson on mandolin, add fantastic texture both to the country-stained and the pop-oriented songs.

Tight where it needs to be, yet ragged in the right places, Live is a treat for fans, but also a great primer for the curious.