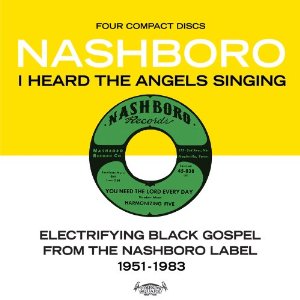 With recent crossover success of gospel icons Mavis Staples and the Five Blind Boys of Alabama, along with the sacred steel school of slide guitar coming out of the shadows, this four-CD package focusing on more obscure acts of Nashville’s Nashboro label is indeed welcome. But be prepared for nearly as much frustration as enjoyment if you’re concerned with details like who’s singing lead, let alone playing guitar. The liner notes concentrate more on label owners, studio addresses, and disc jockeys – and, to be fair, Hoss Allen, Gene Nobles, and John R. (of Ernie’s Record Mart fame) played a huge part in popularizing down-home gospel music.

We ﬁnd that Lou Rawls was in the Chosen Gospel Singers, and the Jewel Trio included Candi Staton, but who’s playing the bluesy guitar (seemingly ignoring the pianist’s random bursts) on the Christland Singers’ “You Got To Be Born Again” is anyone’s guess. Guitarist Robert Hightower played guitar on his brothers’ “It’s Glory Glory” and backed the Supreme Angels on “Run To The Rock,” and Sullivan Pugh’s tremolo guitar shines on “This May Be the Last Time” by the duo the Consolers, with his wife Iola.

Imagine hearing these uplifting and poignant songs streaming out of a radio, before the Information Age, and the sounds of the Swanee Quintet, Golden Trumpets, and Travelin’ Echoes will transport you.