The J-185 is regarded by many players and collectors as the finest-sounding Gibson flat-top made after World War II. The only flat-top of its size and shape made by Gibson in the 1950s, the company offered nothing comparable even in its pre-war catalogs, and though it is in many ways similar to the J-200, it’s a very different instrument.

The J-185 was introduced in 1951 with a Sitka spruce top, curly maple back and sides, mahogany neck, and a Brazilian rosewood fingerboard with double-parallelogram inlays. By comparison, the J-200 had a two-piece maple neck with a dark center lamination and crown-shaped fingerboard inlays. Both had a Brazilian rosewood bridge, but with a moustache shape on the J-200 and a reverse-belly shape on the J-185. The pickguard shape is also the same, but the J-200’s guard is thicker, with decorative floral engraving. Initially, the 185’s body was 51/4″ deep, but by ’55, it was reduced to 415/16″, and at 16″ wide, it was smaller than the 200’s 17″ body. The 185’s lighter-weight construction utilized thinner wood than the 200, which makes the 185 very responsive. In addition, its 243/4″ scale (versus the 251/2″ of the 200) alters the sound and feel of the instrument compared to the 200.

The size and shape of the Gibson Jumbo body harks back to Orville Gibson, though the archtop instruments he famously designed were very different in construction. With the exception of the cutaway, the shape is the the same as that of the ES-175. Another interesting feature was its cross-shaped bridge inlays, their likely origin appeared on the GS-85, a rare classical (27 were shipped) made from 1939 to ’42. 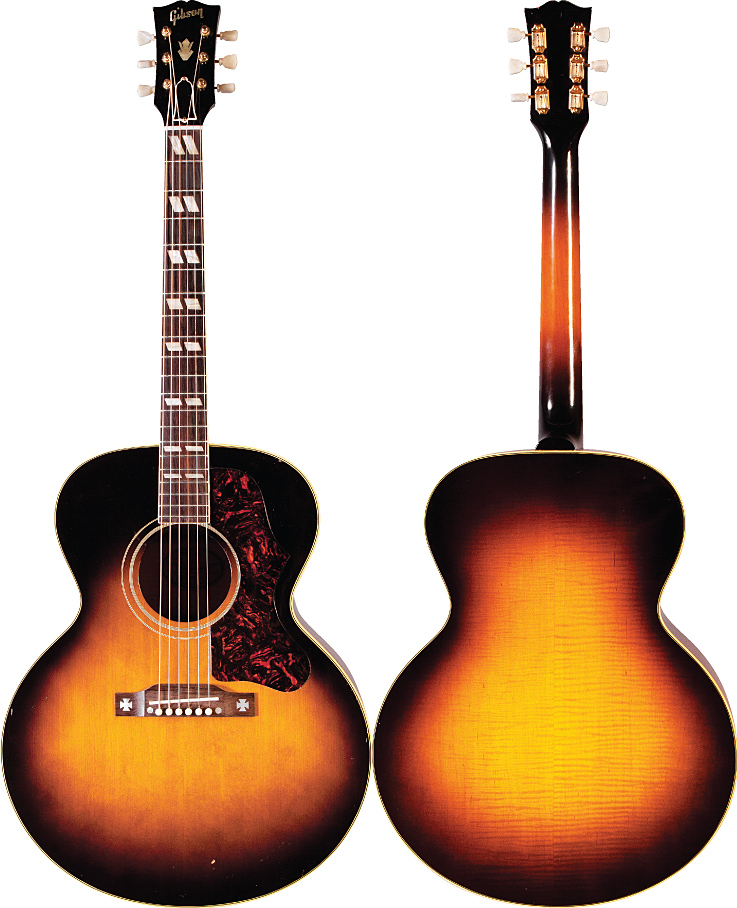 It’s interesting that this body size was virtually unavailable on flat-top guitars prior to World War II, and was all but ignored even into the ’50s. Today, though, the shape and size are widely employed among big-name guitar builders including Taylor, Collings, Santa Cruz, and Guild. And while the Martin J model has a different shape, it is essentially the same size, and is functionally similar. Even Gibson currently makes several models of this size and shape, including a J-185 reissue that has sold well. Going back, Gibson’s Everly Brothers model of the ’60s differs radically in ornamentation, but is the same size and shape, and the late-run Guild F-40 was very close in size.

Any vintage instrument that is truly rare today was not a great commercial success when new. Many prized vintage models struggled, sales-wise, because their design was ahead of its time or because they appeared at the end of a wave of popularity for a particular musical style. Loar-era Gibson F-5 mandolins of the 1920s and five-string flathead Mastertone banjos of the ’30s were made after a surge in the popularity of mandolin music and prior to the advent of bluegrass music. These instruments were not highly prized until they were later popularized by Bill Monroe, Earl Scruggs, and other players of such stature who reintroduced them to the world as bluegrass instruments. When introduced in the late ’50s, Gibson’s Flying V and Explorer models were commercially unsuccessful and generally considered a joke. In time, they became hugely influential, and even popular among rock-and-roll players.

Conversely, other rare vintage instrument models are virtually unknown today because customers of the time quickly recognized an inferior or impractical product when the model was introduced. Though the rarity caused by small production numbers may be good if you are a coin, stamp, or fine-instrument collector, it is not the goal a manufacturer seeks when introducing and trying to sell a new model.