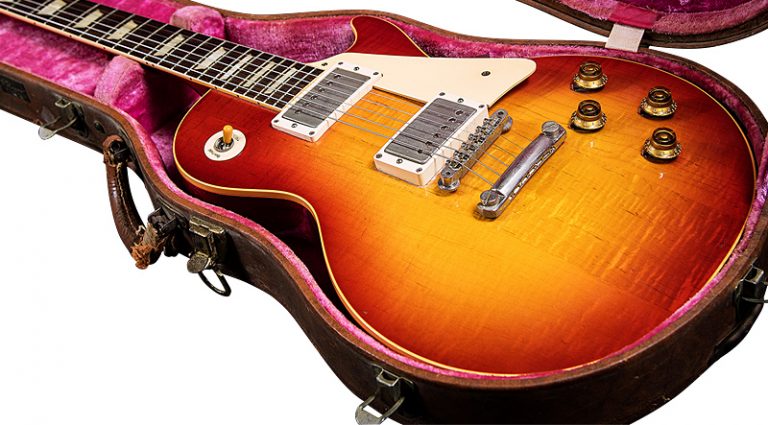 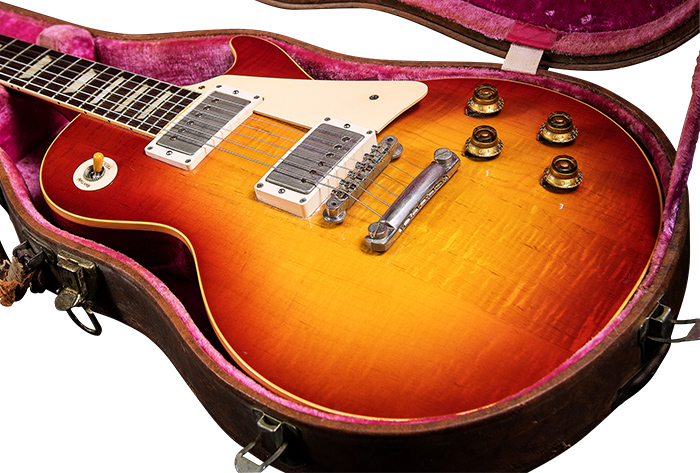 In May of 1958, a worker at the Gibson factory pulled two Les Paul guitars – serial numbers 8 3087 and 8 3096 – off the line and sprayed their bodies yellow in the center, bordered in red.

The result of months of experimentation, Chicago Musical Instrument Company (Gibson’s parent) hoped the look would imply the quality of a finely crafted violin and reinvigorate sales of the Les Paul. Though the guitar sold in modest numbers, that finish, dubbed “cherry sunburst,” would become the key element of the ’Burst – the world’s most collectible production solidbody.

Sunburst finishes – even those with a reddish favor – were nothing new for Gibson. In 1914, high-end mandolins and guitars sported a “red mahogany” that was lighter in the middle than around the edges. It gave way in 1922 to the “Cremona” sunburst of the F-5 mandolin, which was a dusky yellow in the middle and deep brown on the edges.

The Les Paul line was, from the beginning, an excursion into new colors for Gibson, starting with the goldtop of the Les Paul Model of 1952 and branching out with the black Custom and yellow TV Junior of ’54. However, Gibson was overshadowed by Gretsch’s 1955 collection, entitled “Guitars for Moderns” and featuring guitars in green, orange, white, and red… not to mention Lotus Ivory and Copper Mist. At Gibson, Les Paul sales were freefalling, from 2,245 in 1953 (the first full year of production) to 598 in ’57. The goldtop clearly needed a makeover. Red, being bold and having a place in Gibson tradition, was the first choice for something new.

Gibson shipping records, unfortunately, can’t tell the complete story. The ledger book that would have most of the 1957 shipments is missing. The book that starts in late ’57 shows that Gibson experimented with red finishes through the first part of 1958.

The first indication of a new finish in the works was logged February 21, 1958, as “LP cherry red.” This guitar, serial number 8 1689, has a uniform cherry stain on the top and was part of shipment of great historical importance that went to CMI and included an ES-335, a “Flying V in korena,” an EB-2, and a “dbl neck mandolin” which probably had a standard neck and a short-scale six-string neck. All five were new models.

Four days later, on February 25, “LP (cherry red sunburst)” was logged into the shipping ledger. It, too, was sent to CMI, to the attention of sales manager Clarence Havenga. Curiously, its serial number, 8 1641, is lower than the cherry-top guitar shipped February 21. This guitar is indeed cherry and is sunburst, but it is not the same cherry sunburst we call “burst” today. Instead, it looks as if it had first been finished in Gibson’s traditional yellow-to-brown sunburst (“tobacco”) and was then sprayed over entirely with cherry. Even the serial number has a cherry-washed look. Most of the red top has since faded to the point the center is yellow with red highlights in the woodgrain.

Almost a month later, on March 20, 1958, Gibson shipped yet another version of a cherry Les Paul, logged as “LP (cherry red).” This one, with serial number 8 1742, sports a monochrome interpretation of cherry sunburst that may have been inspired by high-end Gibson mandolins and guitars of 40 years earlier; the finish was applied to the back of the body and neck as well as to its three-piece top.

Finally, on May 28, Gibson found the right cherry sunburst, and guitars 3087 and 3096 made it to CMI in time to for the annual NAMM trade show, held in Chicago each July. Still, it took time before the new finish was implemented – the exact date cherry sunburst supplanted goldtop is not known because ledger entries stopped abruptly at the end of June, 1958, though goldtop Les Pauls were made with serial numbers into the 8 5000s range.

There was one small but obvious tweak that had to be made in the specs, though it wasn’t to the finish per se. The two sample guitars were intended to be goldtops, with the top grain and top seams hidden under paint. One had a three-piece top, the other a seam slightly off-center. The production version would have a bookmatched two-piece top with the seam in the center.

At the time 8 3087 was made, CMI apparently did not consider the three-piece top to be an issue, and its center piece had a pronounced figure in the wood grain. It was approved, either to be sent on the road with a salesman or directly to a dealer.

Gibson’s dealer in Memphis was O.K. Houck, where Scotty Moore and Elvis Presley bought their guitars. One day in late ’58, an aspiring 14-year-old guitarist named Tom Griffiths got in the car with his father and drove to O.K. Houck to pick out a new guitar. There, a Gibson rep was demonstrating two new models. One was a Les Paul with the new cherry sunburst finish. The other guitar, Griffiths remembers, had a thinner body and pickup selector in the same position as the Les Paul – possibly a prototype ES-335.

The rep made such an impression that Griffiths remembers his name – Andy Nelson. An accomplished guitarist, he was pictured in the “Galaxy of Stars” section of Gibson’s 1960 catalog and he was responsible for the development of the L-5CT George Gobel model as well as Epiphone’s Excellente.

Griffths’ father bought the Les Paul for him, along with a Gibson amp. A few months later, he dressed in a sport coat and tie to pose for a snapshot with his guitar. He continued to play it through high school. Along the way, he broke several jackplates, so he replaced it (and jack) with a heavier plastic piece. A too-quick swipe at the pickup selector switch resulted in a broken washer, so he replaced that part with a repro. In 1963, he bent one of the tuners and had it replaced. Though Gibson had begun using tuner buttons with a “double-ring” design, the repair shop still had some of the older single-ring Kluson Deluxes, so the replaced tuner is period-correct, though the button did not shrivel with age as the originals did.

While 8 3087 stayed out of the public eye with Griffiths, its “brother” from the May 28, 1958, shipment achieved notoriety when Yasuhiko Iwanade’s The Beauty of the Burst was published in the late ’90s. The first guitar pictured was 9 3096, which was owned by Slash, guitarist with Guns N’ Roses. A story on Gibson’s website in ’98 noted there was a lower-numbered guitar – 9 3087 – with the same yellow-to-red sunburst finish. Seventeen years later, here it is!

Walter Carter is the co-owner of Carter Vintage Guitars, Nashville, and the author of a dozen books on vintage guitars and guitar companies.