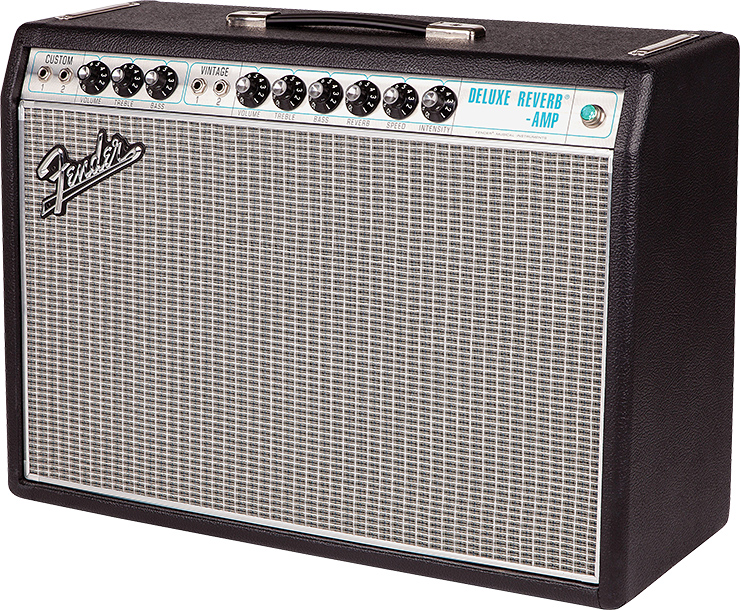 In 1968, Fender gave its amp line what collectors today look back on as a major facelift when it introdued the silver-and-turquoise silkscreened faceplate and aluminum “drip edge” grille trim. The company recently reissued that classic look with its ’68 Custom Deluxe Reverb, but this time it’s the amp’s tone and features that get the “facelift.”

Keeping in sync with the ’68 design, the new amp features the same custom Schumacher transformers, hand-wired tube sockets, dual independent channels, a duet of 6V6 power tubes producing 22 watts, a single 5AR4 rectifier tube, a quartet of 12AX7 preamp tubes, and a pair of 12AT7 pre-amp tubes for the tube-driven spring reverb and vibrato circuits. Where the amp breaks tradition is with some new key features, including shared reverb and tremolo in both the Custom and Vintage channels, not just the latter; an upgraded 12″ Celestion G12V-70 speaker for a more modern sound; reduced negative feedback for greater touch sensitivity; and a modified Bassman tone stack in the first channel for greater variety in tone possibilities.

The ’68 Custom Deluxe was tested with a Fender 60th Anniversary Commemorative Strat loaded with a trio of Fender ’54 single-coil pickups. The Vintage channel proved to be everything players for decades have come to depend on – nice round, clean low-end, even and punchy mids, and shimmering highs – but now with a few more overtones and a bit of attitude. The reduced negative feedback in the power circuit livens up the amp in comparison to its predecessor, making it more dynamic and sensitive to pick attack and to the volume and tone controls on the guitar. The Custom channel, with its Bassman tone stack, ramps up the midrange and adds some “bark” to the top-end, making single notes jump out more and cut through the mix better. Both channels also interact well with a variety of overdrive/distortion pedals, allowing its user to add sustain and overdrive to the front end of the amp without sacrificing any of its touch-sensitivity or dynamics. The Celestion speaker also adds a bit of articulation to the upper midrange and tightness to the bottom end over the classic Jensen speakers with which Deluxe amps are typically equipped. Finally, the footswitchable tube-driven reverb and vibrato are classic Fender all the way – deep, lush reverb with a nice, splashy decay and smooth pulsing vibrato that doesn’t kill the amp’s volume or tone.

The ’68 Custom Deluxe Reverb delivers plenty of old-school vintage Fender tone but with a touch of boutique attitude and some very welcome custom upgrades.