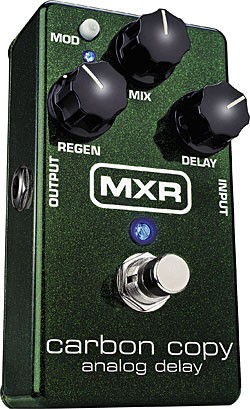 The Carbon Copy analog delay uses MXR’s standard 43/8″ x 23/8″ x 11/4″ heavy duty die-cast chassis with a very cool emerald-green metalflake enamel finish, true-bypass stompswitch with blue status LED, chassis-mounted 1/4″ in/out jacks, 9-volt adaptor jack, controls for Regeneration (repeats), Mix, and Delay, as well as a Mod (modulation) button, which adds a subtle pitch shift to the delayed signal. It’s speed and width are tweaked by way of an internal mini-screwdriver pot accessible from the bottom when the cover is off.

Both in front of and through the effects loop of a combo amp, the Carbon Copy’s repeats are classic low-fidelity – dark without being muddy; analog without being too analog. From short, slap-back echoes to its maximum delay (600 milliseconds) its voicing is very musical, especially with the Mod button engaged, giving the repeats a slight chorus effect. The modulating effect becomes more noticeable on the short-to-medium delays with the Mod turned up; on longer delay times it acts like a tape flutter. 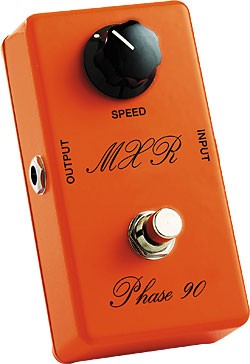 With analog pedals, unwanted noise is a common concern. The Carbon Copy is fairly quiet, producing just a little white noise when run in front of the amp, and even less through the effects loop unless its Mix control is turned way up.

The ’74 Phase 90 is an exact recreation of MXR senior engineer Bob Cedro’s personal 1974 script-logo Phase 90 and features a hand wired PC board with select resistor and hand-matched FETs, all in the classic pumpkin orange chassis with black script logo. Its features, components, and controls are accurate to the original and include a single control (for Speed), non-true-bypass switch with no LED, chassis-mounted Switchcraft 1/4″ in/out jacks, and battery-only operation.

In front of a tube combo amp, the ’74 Phase 90 produced great results – a thick, rich buttery phase-shifting sound that doesn’t over-color the guitar/amp’s natural sound. At 10 o’clock, the Speed control offers a deep, liquid Van Halen-esque effect. Roll it up to 3 o’clock and behold its very usable Leslie-like sound.

The Buddy Guy signature Crybaby Wah is housed in Dunlop’s standard wah chassis, but dressed up considerably with Buddy Guy’s trademark polka-dot finish, a Fasel inductor, Filter switch with LED indicator, bypass footswitch with LED indicator, and a treadle imprinted with Buddy Guy’s signature. The side-mounted Filter switch (which can be activated with the foot) offers two voicings, labeled “BG” and “Deep.”

In Deep mode, the pedal produces a thick, throaty sound with a smooth sweep, while in BG mode the tone is classic Clyde McCoy – sweet, crisp, and sharp. The unit’s dual status LEDs (one on each side) are convenient. The Mode switch is also side-mounted and can easily be switched mid song using only the foot, which is a cool feature and allows you to go from a nice, funky wah in BG mode quickly to Deep mode for a more in-your-face wah.

All three of these units are solid additions to the MXR/Dunlop family and offer “boutique” pedal tones, features, and vibe from one of the biggest of the big boys.