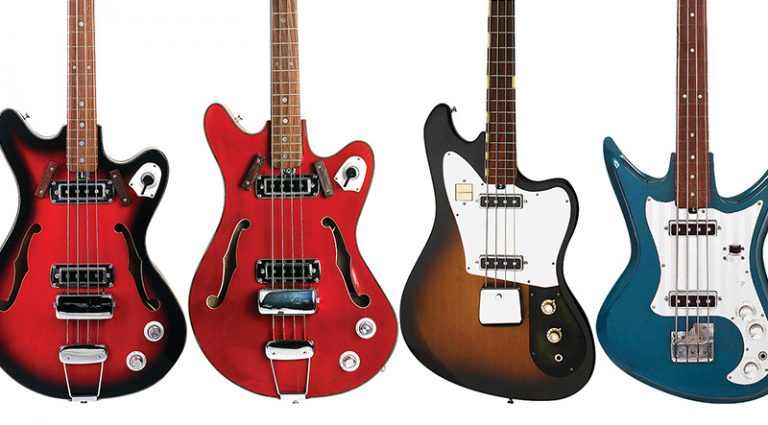 Teisco Del Rey basses from the 1960s are exemplary of the Japanese-made instruments that swept into the American market like a tsunami during the “guitar boom” – and were the primary contributor to the demise of America’s budget-guitar industry.

Which means, of course, that an untold number of American teenagers played instruments like these.

During that era, Teisco instruments were imported from Japan by Westheimer Sales, a distributor that, for the U.S. market, changed the brand name to Teisco Del Rey.

One of the more-seen Teisco Del Rey basses thumped in garages across the country was the solidbody EB-200, a simple, short-scale instrument with practical (and interesting) aesthetic features. The headstock has an oversized silhouette that exudes an Egyptian-pharaoh vibe, and the crown on the logo plate alludes to the “Del Rey” (Spanish for “of the king”) portion of the name. The 21-fret rosewood fretboard was shown with rectangular position markers along the bass side and double blocks (one along the treble side) at the 12th fret. The bridge/tailpiece was under a plate that attached with a single screw. Under the top edge of the plate was a piece of grayish-green foam that muted the strings.

A four-page Teisco Del Rey brochure from early 1965 described the two rocker switches as “individual noiseless velvet touch on/off switches” that controlled “Two ultra high sensitive pickups.” The text further notes that, “Brushed satin metal plates protect the body finish,” a reference to not only the pickguard, but a plate on the headstock (which, on some instruments, was white plastic).

By the following year, many Teisco Del Rey solidbody guitars and basses (and associated brands) were given striped brushed-metal pickguards; their matte finish applied to reflect light in two directions. By ’66, the headstock of most Teisco basses (solidbody and thinline) had been given a three-plus-one tuner configuration, while most electric guitars in the line had a four-plus-two layout.

Other solidbody basses with different body silhouettes, such as the EB-220 (seen here in metallic blue) also appeared by that year; note the partial German carve around the top of the body. The “stripes” on the pickguard are faded but still visible.

In ’66, Teisco introduced the EP-200B, a short-scale thinline hollowbody with offset body waists and offset cutaway horns, a la Fender’s Jazzmaster and Jazz Bass. Newer models began to exhibit ordinary dot markers on the fretboard instead of edge-mounted blocks. The EP-200B had 21 frets, like its peers and predecessors.

The top of the 200B’s body was a bit crowded, with two pickups, f-shaped sound holes, a thumbrest, a finger rest, master Volume and Tone controls, and a three-way rotary switch on the treble cutaway. The separate bridge was still covered by a plate that included foam for muting, and the trapeze tailpiece had an oval-shaped portion where the strings anchored.

Teisco Del Rey guitars and basses were marketed in the U.S. only briefly, as the company adapted to pursue emerging trends. Still, they stand as great examples of cheapo models that umpteen babyboomers played as kids.