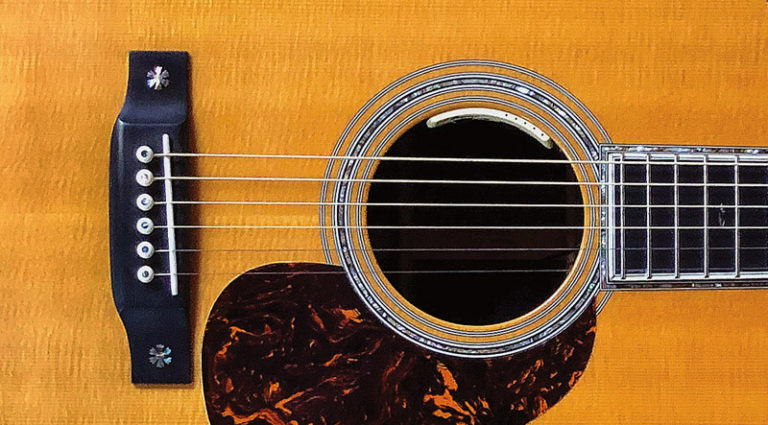 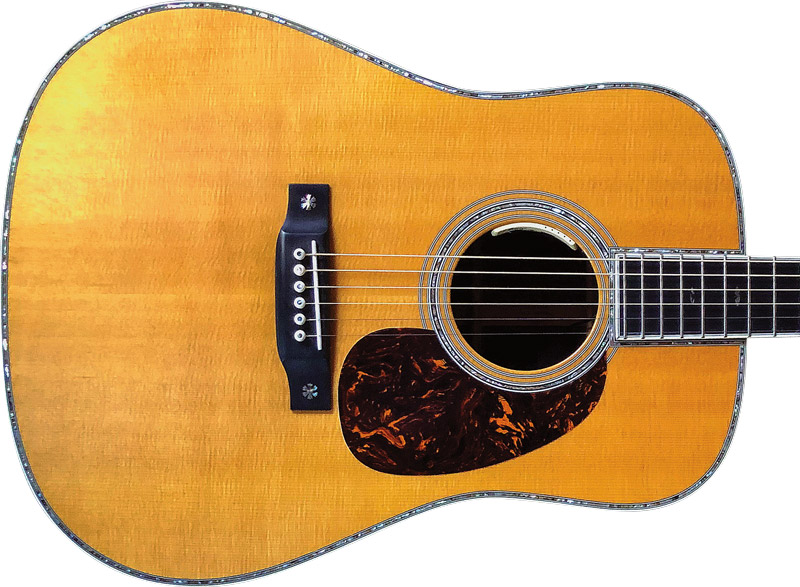 For years, one of the most common jobs I’ve been asked to do is put a pickup in an acoustic guitar. Compared to most of my work, it’s pretty basic, and anyone with a modicum of DIY ability and proper tools could tackle even a modern acoustic-pickup system, which uses a piezo element under the bridge saddle along with a microphone on the bridge plate and a control for blending the two. 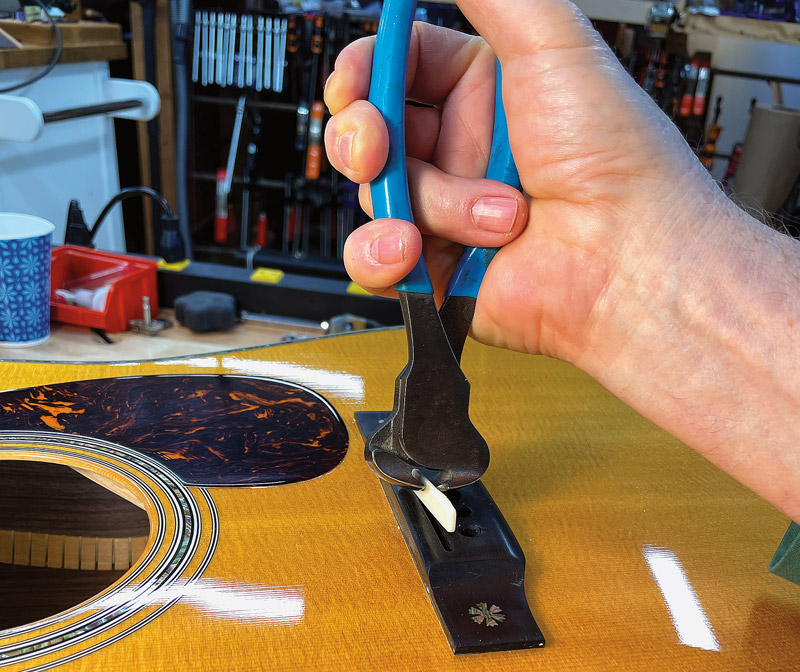 1) The system I’m installing uses a piezo strip transducer under the saddle, so the process starts with removing the saddle. For this, I use a pair of old fret cutters on which I’ve smoothed the edges with a grindstone and Dremel. It works well for grabbing the saddle without marring. It’s best to lightly wiggle the saddle as you pull it up and out. 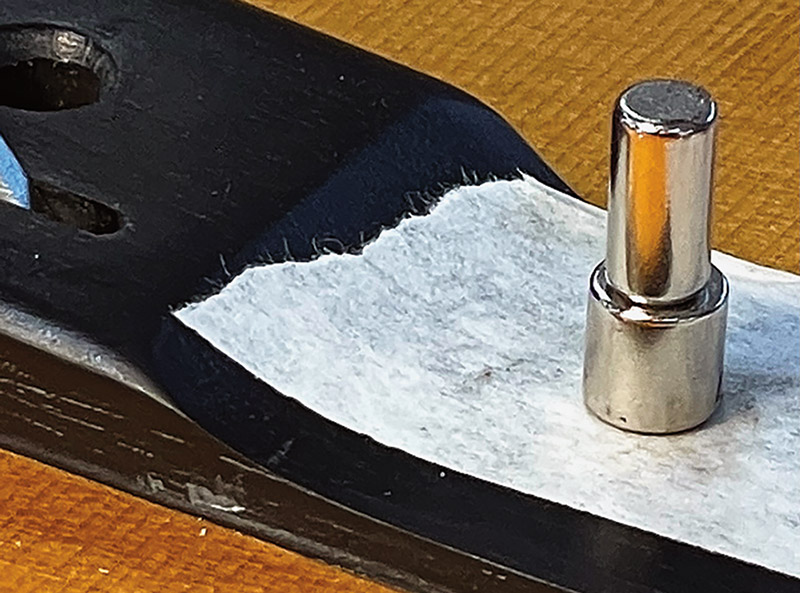 2) Next, I drilled a hole at a 45-degree angle on the bass side of the saddle slot. It’s important to be aware of any interior brace on the bass side, so you don’t drill into it. To locate the brace, I used magnets along the outside of the bridge foot… 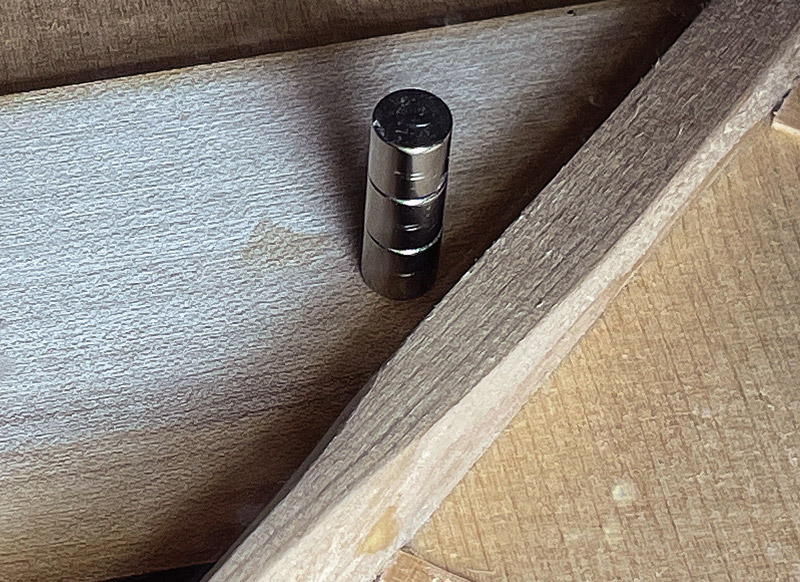 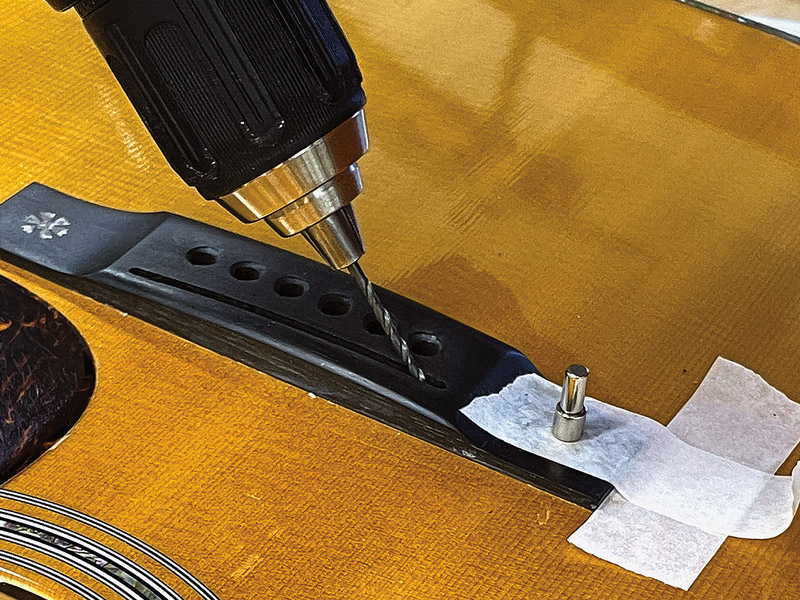 4) Using a 1/8″ bit, I drilled through the top and bridge plate. On the other (treble) side, I drilled another angled hole just deep enough to hold the free end of the transducer strip – not through bridge plate or top. 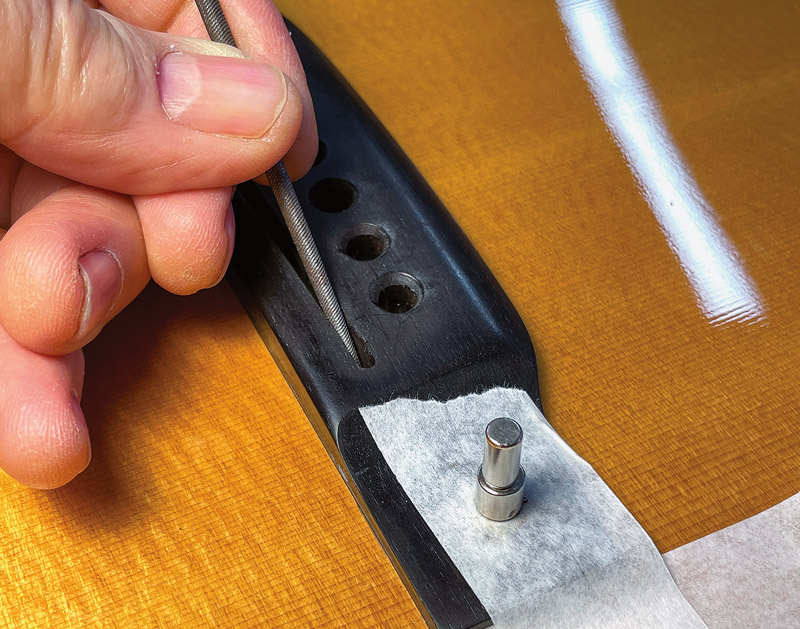 5) I used a small rat-tail file to break/smooth any sharp edges, then carefully pulled the strip up through the hole to lay in the slot. 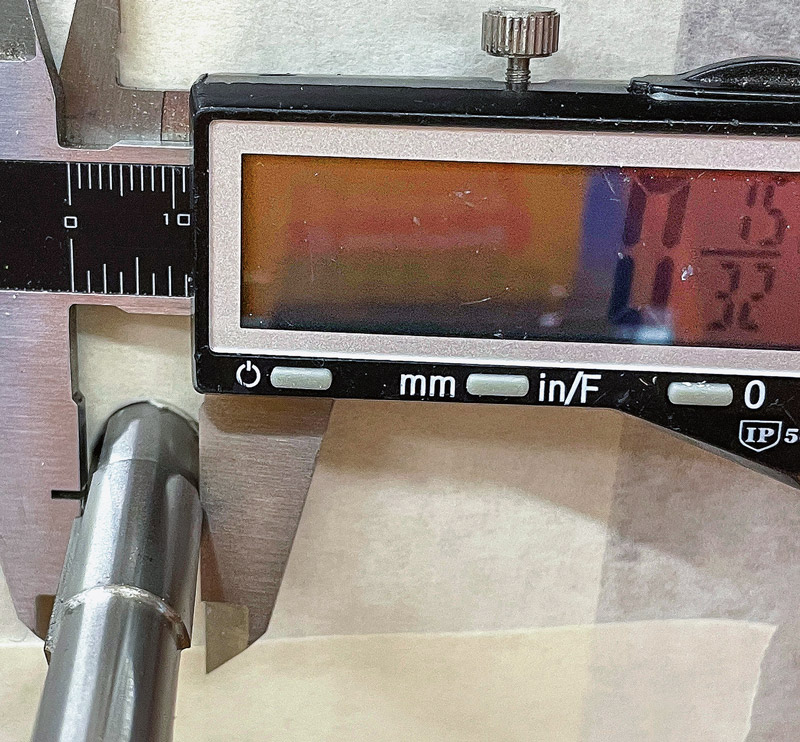 6) Depending on the input jack, the endpin hole must be 15/32″ or 1/2″, and simply drilling a hole centered on the endpin hole is not a good idea, as the wood (or in the case of this Martin, the decorative wedge inlay) can easily be damaged; I also used layers of low-tack tape to protect the area.

The StewMac Endpin Reamer is made for this, and is far better than using a drill bit. It’s 6″ long and has a 3/8″ shank to fit an electric rill, while the business end measures 1/4″ in diameter at the tip, to fit the factory endpin hole, and has a 5-degree taper that runs for 25/8″, becomes 15/32″ (non-taper) for one inch… 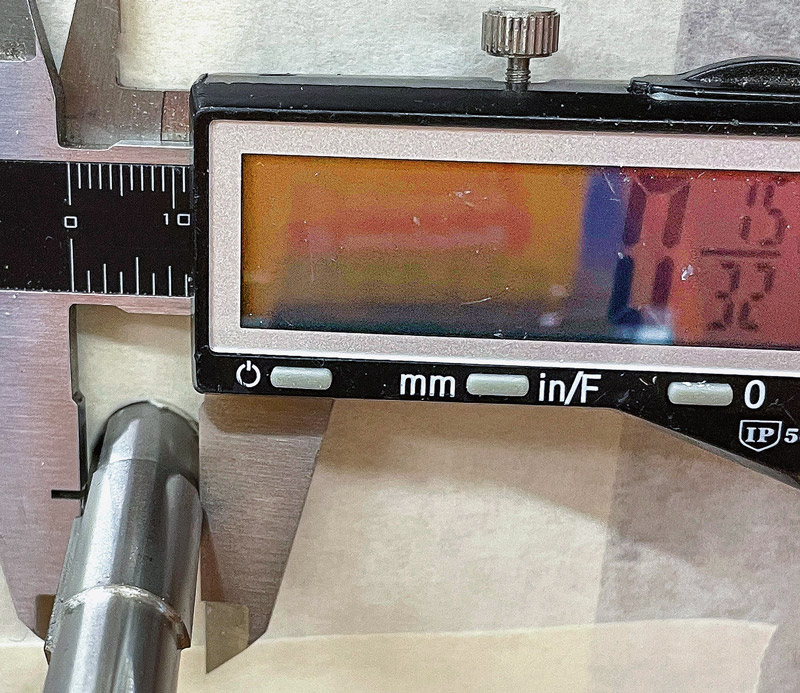 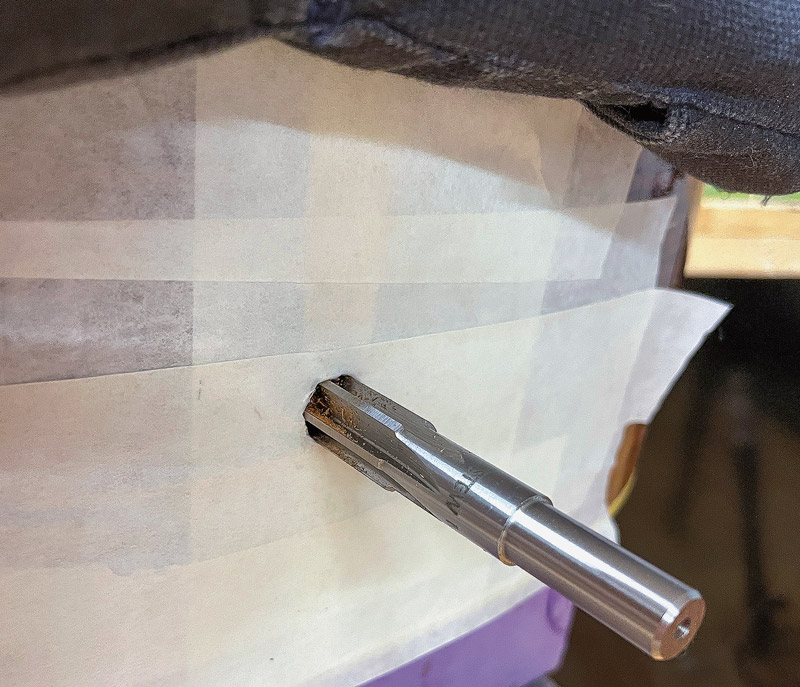 8) For this jack, I stopped reaming at 15/32″, then slowly and steadily squared it to the end block and sides, removing it a time or two along the way to shake off the wood chips. 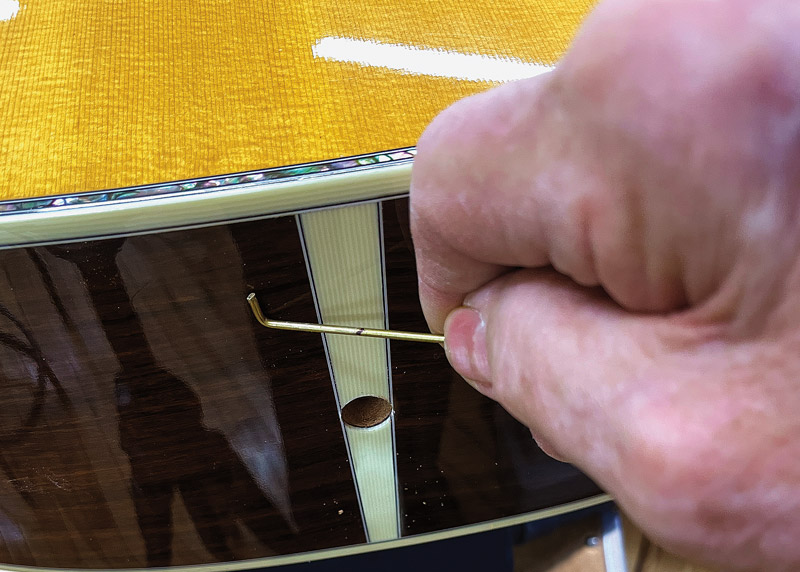 9) Knowing how thick the end block and sides are makes it easier to adjust the inner and outer washers and hex nuts that hold the jack. To measure it through the new hole, I used a small brass rod with one end bent at a right angle; I put it through the hole and pulled the bent end against the inside of the block, then made a mark. It’s 7/8″ thick. 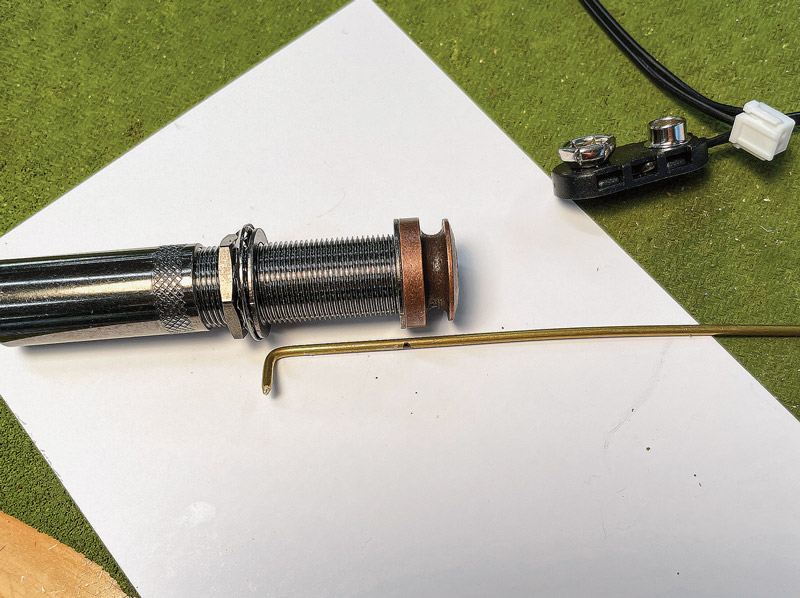 10) Exact spacing of the hex nut and washer. 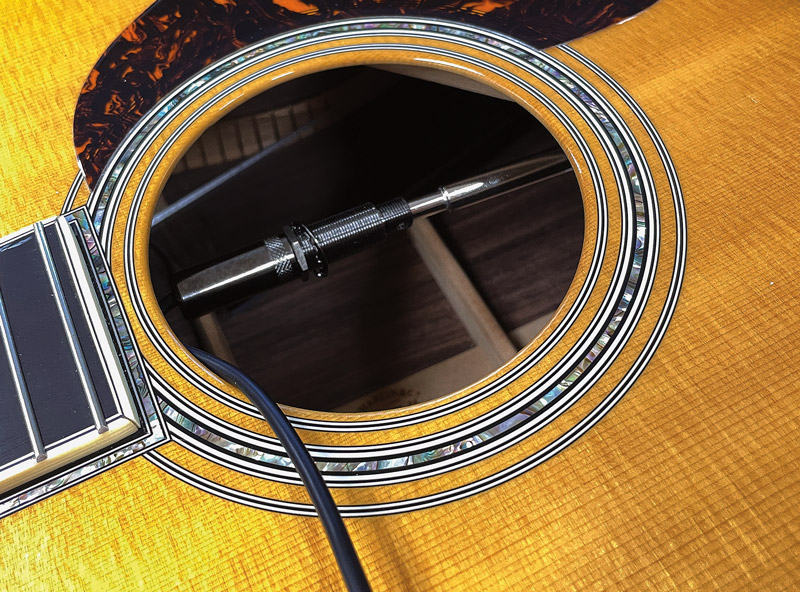 11) With the nut and washer adjusted, I poked the StewMac Jack Installation Tool through into the jack, then pulled it into place. 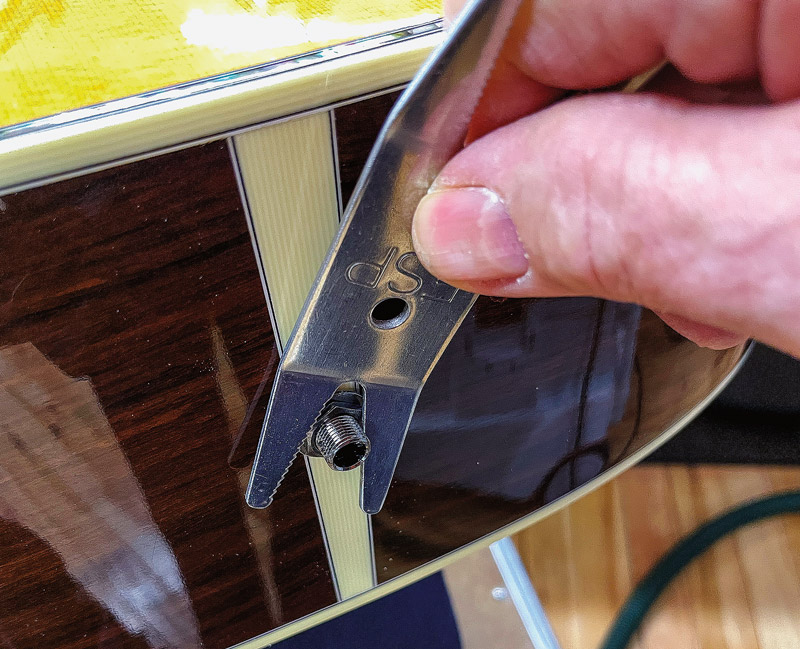 12) With the jack through the hole, I fastened the washer and hex-nut using a multi-spanner. 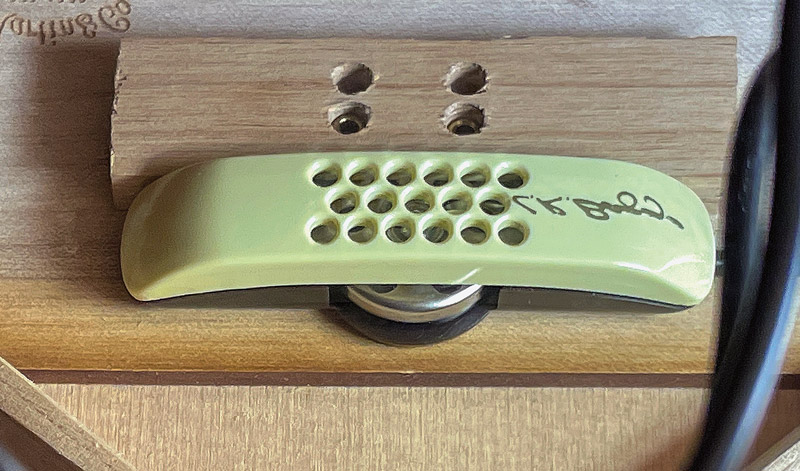 13) The microphone, battery pack, and sound hole controls mount with peel-off adhesive pads. Working through the sound hole, I used a rag dampened with alcohol to clean the wood areas where they would mount; adhesive sticks better if you do this, and it’s also a good idea to seal the areas with a wipe of shellac, superglue, or lacquer.

The microphone is the trickiest component to mount because it goes on the bridge plate, in front of the pins and string ball-ends. To locate it, I installed the D and G bridge pins and moved the mic around until its center nestled between the pins. I prefer using a block of wood as long as the microphone and with a curved cutout that matches the mic’s round center. The holes in the block you see here line up under the D- and G-pin holes… 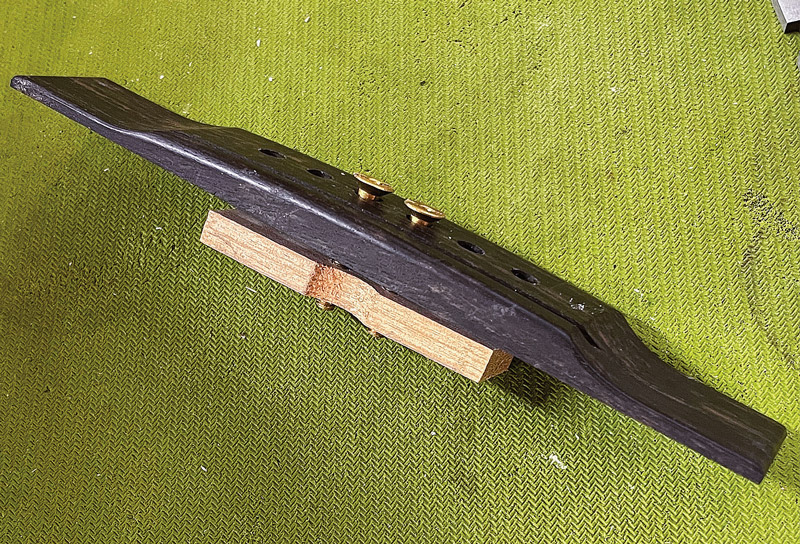 14) …and fasten to the plate with two bridge bolts from outside. The holes in the wood block are tapped. I like this better than locating against two bridge pins because it gives a solid fence and ensures the unit is running parallel to the pin holes. The set of holes in the block is for bridges with pin holes farther from the saddle, like certain Harmony models.
The battery pack can be mounted anywhere; I put it on the back, along the treble side, where it’s reachable through the sound hole. 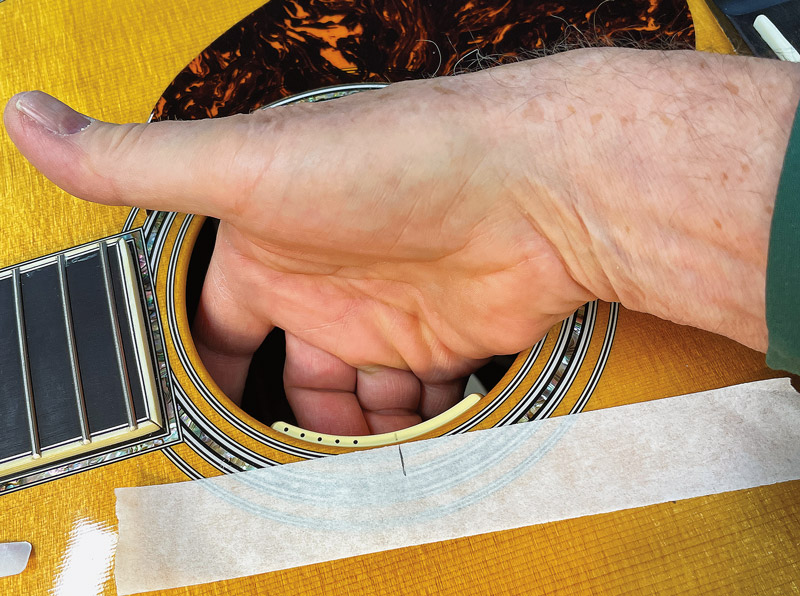 15) To mount the control panel, I pressed it carefully but firmly against the top using a padded block of wood.