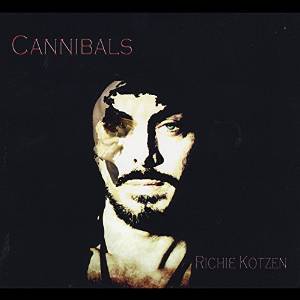 Recapping the fabulous career of Richie Kotzen, the Winery Dogs were hailed as an overwhelming success. Fender finally issued the Richie Kotzen Signature Telecaster in America, and The Essential Richie Kotzen was released for those who arrived late to the soirée.

On Cannibals, Kotzen escalates his songwriting and production prowess, blending his predilection for funk, blue-eyed soul, and ballads that rock. With a nod to Sly Stone, Todd Rundgren, and Hall & Oates, this is a mature, hands-on record, with lo-fi flourishes. Big choruses and pop embellishments are tempered with hip-swaying grooves, and the type of guitar playing that never overshadows the song.

The title track, “In An Instant,” and “Come On Free,” show Kotzen moving toward radio-friendly accessibility without selling out. “Shake It Off” is true funky goodness with a ripping guitar solo. Dug Pinnick of King’s X shares the singing on “I’m All In” for some evenly matched funkalicious vocal performances.

The ballad “The Enemy” feature country colors and honky-tonk pedal steel, while the plaintive “You” and accompanying Theremin solo, will tear at your heart.

This is the next wave of the Kotzen experience, full of finger-snapping grooves, heart-tugging vocals, and inspired lyrics.