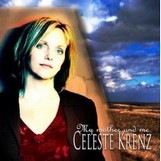 Celeste Krenz has never shied from writing intimate songs, and here she explores the relationship between herself and her mother, Jean, by having her co-write most of the 12 songs; armed with a collection of lyrics her mother wrote 20 years ago, Krenz applied the melodies.

Krenz emerged from the Denver music scene in the early ’90s and Tim O’Brien produced her second album, Slow Burning Flame, in 1994, with himself on mandolin and fiddle, his sister, Mollie, on harmony vocals, and Sally Van Meter on dobro and
Weissenborn guitars. The release established Krenz as a singer and songwriter of rare talent, with a pure, sweet voice. After 11 years in Denver, she moved to Nashville, where she continues to write powerful songs and release critically acclaimed albums.

My Mother & Me may be Krenz’s most personal album to date, though the songs have a universal message. It covers a wide stylistic swath, from upbeat honky-tonk blues to slow, soulful ballads. Regardless of genre, the tunes display Krenz’s innate musicality and grace.

The Morells – Think About It