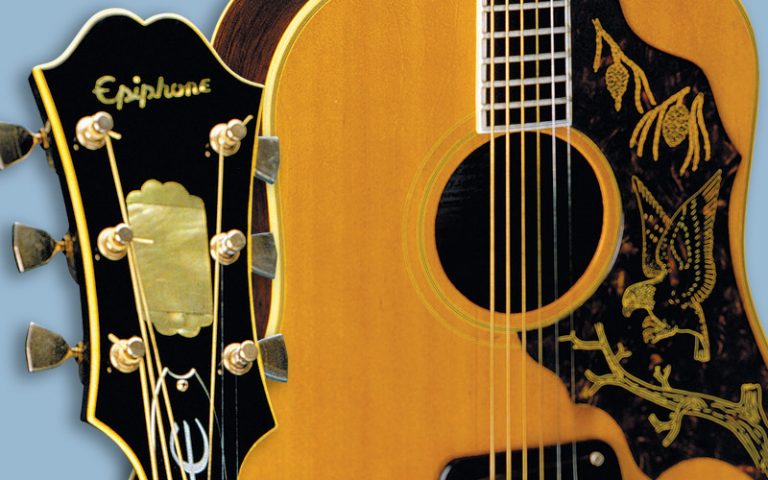 When Gibson acquired Epiphone in 1957, the plan was to introduce a new line of Epis that would be made in the Gibson factory but designed to be slightly less expensive than the equivalent Gibson model.

It worked out that way in the electric line of the 1960s, where the more expensive Epis had mini-humbuckers and the equivalent Gibsons had full-size pickups. But in the acoustic flat-top line, it wasn’t quite that cut-and-dried. The Epi Texan was a little cheaper than the Gibson J-50, but its parallelogram inlays were a little fancier than the J-50’s dots. The Epi Frontier in sunburst was a little cheaper than the Gibson Hummingbird, but the natural Frontier was the exact same price as the Gibson. It looked as if Epiphone were somehow threatening to surpass Gibson, and the threat became reality in 1963 with the debut of the Epiphone Excellente, a model that had no equal in the Gibson line.

Epiphone’s new identity was the brainchild of Gibson president Ted McCarty. The company had roots back to the 1800s in Greece and Turkey; patriarch Anastasios Stathopoulos moved the family to New York in 1903; his sons Epi (Epaminondas), Frixo, and Orphie carried on the family business, becoming a major banjo maker in the 1920s and Gibson’s most formidable competitor among the guitar makers of the 1930s and early ’40s. However, Epi’s untimely death of leukemia during World War II left the company without effective leadership. Orphie sold what was left of Epiphone to Gibson in 1957. McCarty bought the company for its bass production capability, which then proved overrated. But he quickly came up with a new plan to quell a growing problem with Gibson dealers.

Gibson protected its dealers’ territories, and consequently, there were many stores that wanted Gibsons but could not get them. If Epiphones could be “almost a Gibson,” then the dealership base for Gibson-made instruments could be effectively doubled without actually opening any new Gibson dealerships. In early 1958, McCarty met with M.H. Berlin, president of Gibson’s parent company, Chicago Musical Instruments, along with several sales executives, and drew up a new line that incorporated elements from past Epiphones, current Gibsons, and even competitors’ models (such as Martin and Fender).

Some Epi electrics crossed over the “almost a Gibson” line. The Emperor, for example was larger than any Gibson thinline electric, and cost more than any Gibson except the carved-top Johnny Smith. The flat-top line, however, initially kept a low profile, starting with the Cortez (a version of Gibson’s small-bodied LG-2), the Texan (corresponding to Gibson’s round-shouldered dreadnought J-50) and the Frontier (intended to compete with Martin’s square-shoulder dreadnoughts but with the maple back and sides of the earlier Epi model FT 110).

Dealer and consumer reaction to the new Epi line was favorable, and the Epi sales force embraced the brand with pride. Every time a new Gibson was introduced, McCarty recalled, Epi sales manager Les Propp demanded something just as good for the Epi line. Out in the field, Gibson salesman and product demonstrator Andy Nelson was busy sketching out a full line of fancy Epiphones. At one point, Nelson said, he was called into McCarty’s office and told to knock it off, and that Epiphones would always be a notch below Gibsons. Nevertheless, one of Nelson’s designs made it into production as the Excellente, and no Gibson flat-top – not even the venerable J-200 “King of the Flat-Tops” stood above it.

The Excellente debuted in 1963, sporting a square-shouldered dreadnought body with rosewood back and sides. The rosewood alone made it different from any standard post-WWII Gibson. The oversized pickguard featured the engraved image of an eagle landing (which would later be revived on the Gibson’s deluxe archtop Kalamazoo Award). The ebony bridge had its own shape (although it might be interpreted as a droopy reference to the J-200 moustache), and unfortunately, it had the height-adjustable saddle that plagued Gibson and Epi flat-tops in the mid ’60s. The bound ebony fingerboard sported cloud inlays, the signature inlays of Epiphone’s DeLuxe archtop (which was to Epiphone what the highly respected L-5 was to Gibson). The headstock was inlaid with a huge pearl rectangle, with cloud pieces placed above and below. Andy Nelson’s sketch had an ornamental cutout at the top of the headstock, framing the Epiphone epsilon (Greek letter E), but the production version had the standard Epi headstock shape.

The listing was a bit premature, as only one Excellente shipped in 1963, but as might be expected of the fanciest guitar in the line, the Excellente soon found a home in the world of rhinestone suits and big hair. It was almost the Sonny James Southern Gentleman model (VG, August ’99), and Gibson went so far as to build one with a smaller pickguard and a reverse-belly bridge as requested by James, but the country star and his record label felt he was too strongly identified with the sound of his Martin D-28 to endorse an Epi. In the meantime, country music legend Ernest Tubb (whose guitarist, Jack Drake, had arranged for James to meet with Gibson) put down his famous Martin with “Thanks” on the back and began performing with an Excellente. Loretta Lynn found the Excellente to be the perfect symbol of her newfound success, and she performed onstage with it for many years.

The Excellente may have surged past all the Gibson models in price and ornamentation, but not in sales. Total production from 1963 to ’69 was 139. By comparison, the slightly cheaper J-200 topped the Excellente’s total figure every year. During the same period, the Epi Texan was averaging about 1,500 per year and its counterparts in the Gibson line, the J-45 and J-50, around 7,000 per year. The Excellente was effectively out of production by the time of the 1968 price list, where it checked in at $675. Only eight were shipped in ’68, and two in ’69.

Today, the Excellente holds the same position as its price in the 1960s would suggest; possibly the best flat-top made by Gibson in that era, and certainly a symbol of triumph for those who believed Epiphones were every bit as good as Gibsons.

This article originally appeared in VG March 2007 issue. All copyrights are by the author and Vintage Guitar magazine. Unauthorized replication or use is strictly prohibited.