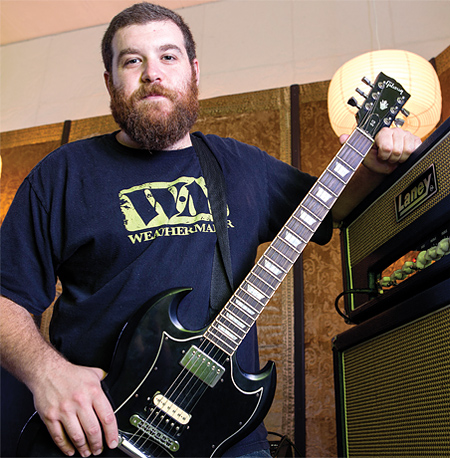 The members of Lionize blend heavy rock with reggae to create infectious tunes… kind of like if the guys in Deep Purple were Rastafarians wrapped in trippy sci-fi imagery. Nate Bergman is the SG-wielding architect of the group, and recently shared the strategy on the band’s latest album.

You guys worked hard on Jetpack Soundtrack.
We’re a rehearsal-oriented band; we demo’ed for a year, and when home, Monday through Friday from 11 a.m to four p.m., we go in the basement and jam. We spent six months doing that; we record, listen back, and get a feel for the sound – tempos and ideas.

One of the producers, Jean-Paul Gaster, has a great studio in his house, and we spent eight months there taking ideas and trimming the fat. He was a huge part of finding the [best] parts.

Are you a riff collector, or do you make up stuff together?
All of the above. Six times out of 10, we’re coming up with it off the cuff, just jamming. Someone might have an idea for a melody; sometimes, Hank has a bass line, or Chris will come with most of a tune. If most are more upbeat and rock, we’ll approach one with a slower, sort of reggae, vibe.

There’s cool use of dynamics on the record.
Dynamics have been missing in rock bands. Our favorite bands – Deep Purple, Sabbath, Led Zeppelin – they’re so multifaceted; it’s heavy, it’s loud, then suddenly it’s an acoustic guitar with tablas. It’s boring if you don’t look for new ways to present a song; dynamics and volume are an easy fix.

You keep changing your rig.
I wasn’t satisfied with how older Marshall plexis thin-out and the newer ones don’t sound like the old ones, so I had an amp built by Brooks Harlan, of Big Crunch. He makes an amp called the One Knob. It’s basically my hybrid of a JCM800 and a plexi. It’s 120 watts, and you just turn the knob up. Then, I got hip to the Laney Pro Tube heads. My rig blended two Laney heads with a treble booster in front of a plexi. The One Knob was on every track, with the SG or a thinline Tele.

Are you a pedal guy?
I’ve investigated tons of modern pedals and tones, but it never gets better than an SG into a tube head turned all the way up with some Vintage 30s. I’m a firm believer that your Volume knob is your boost, but I have a Dunlop MXR Classic Blue Box Octave Fuzz. I also have a 1972 Thomas Organ Wah, a Line 6 DL4, a Keeley Java Boost, and a couple treble boosters.

What are the specifics on the SG?
It’s an ’06 Classic. A friend makes pickups and wired a pair of humbuckers that blend a P-90 and a humbucker. I also had fatter frets put on, and Grover tuners.

There’s less reggae on the new album.
It’s present, but merged with other sounds. To me, there’s a syncopated bass-and-drum thing that makes it reggae. We’re a rock band that loves reggae, funk, and jazz. Jetpack Soundtrack is the evolution of that sound.