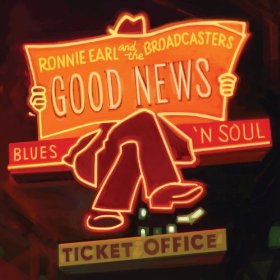 Ronnie Earl’s playing hasn’t changed a lot over the years, but listening to a new record by him is always a pleasant surprise. It’s rare to hear a guitarist who can take his time playing the blues and still play with such fire. This album continues that streak with mostly instrumentals blended with a few vocals by guest Diane Blue.

Blue contributes to one of the highlights on the record, a cover of the Sam Cooke classic “Change Is Gonna Come.” The soulful vocal is a perfect match with Earl’s guitar work.

The guitarist, as always, takes a turn or two not expected. “Time To Remember” is a jazzy tune with a Latin feel and a solo that builds wonderfully. Few guitarists in this genre tell a story like Earl.

He also is one of the true masters of a slow blues tune. His solo on “In The Wee Hours” stays clear of blues clichés while capturing the music’s beauty with ease.

“Runnin’ In Peace” is the perfect finish for the record, addressing the Boston Marathon bombing. It starts as a country blues and finishes with an aggressive Earl solo.