Home Artists Kim Simmonds
Under the aegis of founder Kim Simmonds, Savoy Brown has always been a band “subject to change.” Formed in 1965, some of its incarnations went on musical tangents, but the blues has been its keystone genre.

The band’s most recent album, Goin’ to the Delta, is a return to basic electric blues, with Simmonds reassuming lead vocals in a guitar/bass/drums format. Pat DeSalvo plays bass, while Garnet Grimm plays drums.

“There’s so much involved – personal feelings, [the] actions of those around you, and ‘the muse,’” Simmonds said of the band’s “go with what you know” approach. “All I know is that the new album has resonated with people.”

Simmonds has also garnered recent praise for a solo acoustic blues project that built his confidence as a vocalist. Accordingly, the new album is credited to “Kim Simmonds and Savoy Brown.”

“I felt I was making a statement, and putting my name in front emphasized that point,” he said. “The marquee name has changed over the years; ‘The Savoy Brown Blues Band’ was how it first appeared, and it has changed here and there in an attempt to keep things fresh – simply ‘Savoy Brown’ or ‘Savoy Brown featuring Kim Simmonds’ etc.”

Its songs were penned by Simmonds, who noted influences including “…Albert Collins on ‘Backstreet Woman,’ Lonnie Johnson on ‘Just A Dream,’ and B.B.King, plus Chicago musicians like John Primer and Magic Slim.”

He has been through numerous guitars over the decades, and another facet of the full-circle approach on Goin’ to the Delta is the Zion guitar shown on the cover; he has used the instrument for more than 20 years.

“I used it on all tracks except the slide songs,” Simmonds averred. “It has a hard, generic, non-colored sound that was perfect. Plus, it’s a guitar few people in the blues world use, so I knew it would be a different sound to listeners’ ears. I primarily used the middle pickup to get a less-colored sound – bright, but without the treble pickup. I was looking for a guitar tone that wasn’t immediately identifiable.”

For slide, he relied on a DBZ guitar. DeSalvo, meanwhile, holds down the low-end with a G&L Climax Bass.

“He plays an important role, musically, and manages me on the road!” Simmonds said. “Pat has come into his own these past few years. He’s classically trained, yet able to rock out. I’m not sure why the trio works so well with Pat and Garnet; it’s probably simple chemistry.” 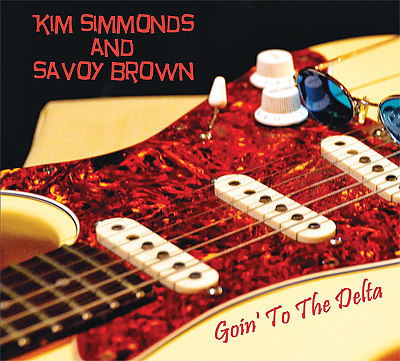 The approach to recording the album was also basic, and any rhythm guitar parts were utilitarian, though the instrumental “Cobra” has a rhythm part that’s more up-front in the mix.

“There is rhythm guitar on most of the tracks, but I deliberately didn’t play counterpoint, so the overdub is simply part of the drums and bass. That’s how I conceived the songs and production.”

The mix on “When You’ve Got A Good Thing” is different, as well, and includes a light reverb.

“The nature of the song demanded a slightly different approach,” Simmonds said. “The album was recorded quickly, with me playing and singing live. We wanted spontaneity.”

Asked about favorite songs, he lists “Laura Lee,” “Sad News,” and “Nuthin’ Like The Blues.”

In concert, he relies on a Heritage guitar and the DBZ for slide. Simmonds also has the future mapped out for his ongoing musical efforts.

“My next release will be an acoustic album of instrumentals called Jazzin’ on the Blues,” he said. “I’ll tour Europe and the U.S., and this summer, I’ll tour with Johnny and Edgar Winter, and in 2015, do the Rock Legends Cruise.”

Simmonds faces the future with a positive attitude.

“This is how life should be – the older you get, the better you get. After all, age teaches you!”