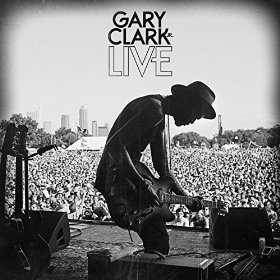 When Gary Clark, Jr. appeared on the national scene, music fans on the Internet suddenly became blues experts. Opinions burst like flak guns on D-Day with everything from shortsighted Jimi Hendrix comparisons to “I don’t get it” mystification. Even with a thumbs up from Eric Clapton, and visceral performances at the Crossroads Festival, it wasn’t enough to earn Clark his due.

When Clark’s Blak and Blu was released in 2012, these so-called blues fans were shocked to discover that a young, forward-thinking 28-year-old black guitar player enjoyed contemporary R&B, neo soul, and hip-hop. Some thought the album was “all over the place,” but didn’t consider the fact that the artist was performing 100 percent Black music. That album, though a little slick, is consistent if you think about it in that light. The idea that early blues artists played blues exclusively is a myth.

On Gary Clark Jr. Live, he abandons the slick for the gritty, and serves a 12-course meal of low-tech, high-groove, and dirty rumble. It’s a seamless package that embraces the blues, but isn’t restricted by it.

Clark knows where his bread is buttered and pumps out back-catalog gems like “Cat Fish Blues,” “Ain’t Messin’ Around,” and “Next Door Neighbor Blues.” He sings the hell out of these tunes with soul, conviction, and legitimacy, while his Epiphone semi-hollow body guitar and Fulltone Octafuzz seem to have usurped the Strat and Tube Screamer.

Clark rock and rolls on the Chuck-Berry-esque “Travis County,” gets psychedelic on “Third Stone From The Sun,” and displays his Eddie Kendricks falsetto on “Come On Home.” The shifts in style are effortless. “Don’t Owe You A Thang” takes us to the swamp with bayou fingerpicking and raunchy Texas slide. The band is on fire throughout, pushing Clark into fresh improvisational territory.
Everything shines on this two-disc set. From the lush solo chording on “Blak And Blu,” the neo-soul crooning of “Things Are Changing,” to the loud, low-down, gnarly stomp of “Numb.” This live disc traverses a wide spectrum of black music bound by the divine guitar influence of Collins and B.B. King.

You’d be hard pressed to find a more scintillating live disc this year.