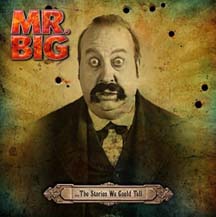 Mr. Big has withstood multi-platinum successes, personnel changes, and volatile disputes. Despite the band’s ups and downs, the original line-up remains intact. Paul Gilbert, Billy Sheehan, Eric Martin, and Pat Torpey stay frosty working in a plethora of outside musical endeavors. 2011’s What If was a hard-charging record, but here on their eighth studio album, the band once again displays the chemistry that has made them a top touring and recording act.

Produced by Pat Regan, the album dials it back with a combination of philosophical insights about life, relationships, and Gilbert’s predilection for early ’70s blues-rock. As one of the most underrated singers in rock, Martin croons with blue-eyed-soul perfection alongside ear-friendly compositions that borrow but never steal. Highlights include “The Monster In Me,” “Satisfied,” and “Fragile.”

The track list shuffles pristine acoustic ballads, mid-tempo rockers, and high-velocity quasi-metal. Gilbert and Sheehan continue to display powers far beyond those of mortal men, but use their gifts for good instead of evil. Always tuneful, Mr. Big has crafted a fine record to add to their legacy. When these guys get together, they produce superb product.