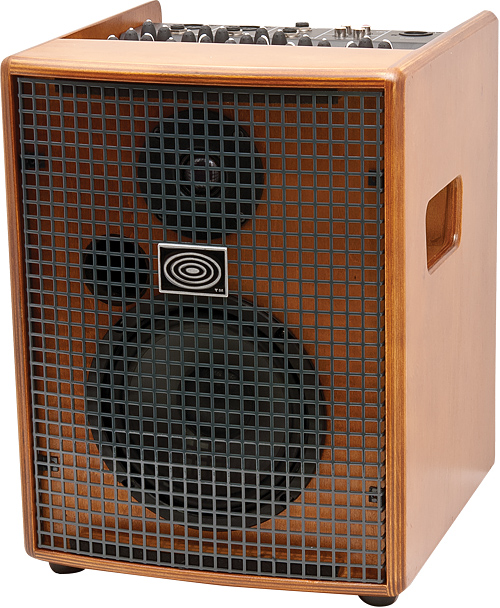 Schertler’s JAM150 is a compact combo amp capable of pulling double-duty as an acoustic amp and a multi-instrument PA. Built in Italy and engineered in Switzerland, its elegant design is matched by its natural acoustic timbres and versatile feature set.

The handsome wood cabinet (also available in gray covering) has a rounded face, a stand mount on the bottom, and side handhold insets for a surprisingly comfortable carry of the 28.66-pound unit, even one-handed. The 150 watts are biamped to two speakers, channeling power separately to the 8″ driver and 1″ dome tweeter. On the back, below the heat sink, are the power in, an on/off rocker, and a toggle for ground lift, which is a welcome feature.

All of the JAM150’s controls and inputs/outputs are recessed into the top and laid out in channel strips, like a PA mixer. Four independent channels with a generous complement of inputs make it possible to connect and discretely control a variety instruments at once.

Channels 1 and 2 each have a balanced, phantom-powered XLR input and an unbalanced High Z 1/4″ input, good for connecting active piezo pickups. Channel 3 has another High Z plus a Low Z 1/4″ in, which is useful for padding hot signals. All three have High, Mid, and Low EQs; FX level; and Volume. Channel 4 has High and Low EQs and stereo RCA inputs suited to an iPod, computer, or keyboard (while acoustic and clean electrics both sounded great through the JAM150, guitars with passive pickups may benefit from a separate preamp boost).

The output section includes a DI output with very low noise and no detectable distortion, putting it head and shoulders above tone-suckers commonly found on stage floors. Because the DI output is always at maximum, while the master Volume controls only local volume, the JAM150 can be nicely situated as a monitor; shape the mix in the channel strips and send it out to the board via DI, and set your own monitoring level with the master. For recording, there are stereo RCA outs with a dedicated record-out level control.

The onboard digital effects – one delay and three reverbs, all by Alesis – are modest and can’t be fine-tuned, but they’re well chosen. The big room on the Rev 2 setting provides all the dimension needed for fingerstyle work and saves the bother of additional pedals. Regardless, an effects loop is also built in (Send, Stereo Return, master Effects Level), defeating the internal effects when active.

JAM150’s adaptable mixer design is a huge selling point for acoustic players who find themselves in different scenarios from one gig to the next. At a live set with a revolving door of players, the JAM150 performed beautifully, both with two acoustics and with one acoustic paired with an electric. The amp maintained the distinct voice of each guitar, and working with differing pickup outputs was easy. We also ran an acoustic through Channel 1, left an open mic on Channel 2, and put a harp player on a bullet mic through Channel 3. The topside controls made it easy to adjust settings on the fly, allowing the full, crisp acoustic guitar to occupy a wide harmonic spectrum while the honky harmonica drove right down the middle, with both sharing reverb room. All of that capability would mean bupkis if the amp didn’t perform on bare-bones solo fingerstyle work. The JAM150’s low-end response is not as deep as it would be with a bigger speaker, of course, but it’s tight and controlled. The midrange, while dominant, is likewise well controlled and can be EQ’d to dial out undesirable frequencies despite the lack of a notch filter. Light fingerwork felt airy, while strongly attacked notes were met with just enough natural compression to rein in the tone and prevent it from splaying. Amplifying a piezo-equipped acoustic played with a pick (where most acoustic amps really start sounding awful), there was none of that brash, synthetic front end that makes players want to rip out their saddle pickup (along with all of their hair).

The JAM150 is an excellent choice for intimate gigs; for bigger rooms, it can be used with a PA or to drive a second cabinet. Acoustic players will be hard-pressed to find another compact acoustic amp that compares with its sound quality and versatility.

This article originally appeared in VG June2014 issue. All copyrights are by the author and Vintage Guitar magazine. Unauthorized replication or use is strictly prohibited.