Beyond being crowned “Album of the Century” by Time magazine, Marley and the Wailers’ 1977 LP Exodus is a wah-wah masterpiece thanks to Junior Marvin and his Thomas Organ Cry Baby. Others – from Earl Hooker to Jimi Hendrix, Frank Zappa to Sly Stone – made their mark with the pedal, but never has so much wah been played on one album, from multi-tracked rhythm riffs to spaced-out lead solos.

For the sessions, Marvin plugged his Fender Stratocaster into a Roger-Mayer-tweaked Cry Baby and an Electro-Harmonix Dr. Q envelope filter, then into two Fender Twin-Reverb amps. He layered up to six tracks of wah on top of each other to cut the distinctive rhythms for classics like “Exodus” and “Jamming.” The sound was part funk, part Jimi, pure reggae. “I was inspired by Jimi Hendrix on ‘Message To Love,’ and ‘Superfly’ by Curtis Mayfield, which had a wicked wah,” he remembers.

Electric guitarists first fiddled with their tone controls to mimic the wah-wah sound of trumpeters such as Clyde McCoy, who waved a mute over his bellhorn to create a human voice on his 1931 hit “Sugar Blues.” In the 1930s and ’40s, Alvino Rey twirled the Tone knob to modulate his guitar’s timbre. Chet Atkins did the same on the 1960 cut “Hot Toddy.”

The wah pedal itself, however, was developed almost by accident.

In 1966, junior engineer Brad Plunkett was working at Thomas Organ Company in Sepulveda, California. The firm had a license with musical distributor Jennings, of England, to build and sell Vox gear in the United States. As part of this, Thomas Organ was developing a solidstate version of the Super Beatle amp; Plunkett was assigned to find an inexpensive replacement for the amp’s $4 Mid Range Boost transistorized switch. He played with a 30¢ potentiometer, using it to adjust the tone instead.

In the documentary film Cry Baby: The Pedal that Rocks the World, Plunkett recalls, “So I went next door and asked a friend of mine, John Glenum, if he would plug his guitar into the pile of wires and resistors and capacitors I had on the bench. He strummed a couple of chords and I turned the knob on the potentiometer and it went wack, wack, wack, and we looked at each other and – I won’t tell you exactly the words we said – we said, ‘Wow, this is really great!’

“We started thinking about, ‘Well, how’s the guitarist going be able to operate this thing? His hands are already busy.’ There was a Vox Jaguar organ sitting in front of one of the other engineer’s benches, so I said, ‘Hey John, go steal that volume pedal from Frank’s organ! Let’s put the pot in there.’ And pretty soon, we were drawing a modest crowd and everybody said it sounded pretty good. But we didn’t really know how good it was going to be.”

The up-and-down action of the foot pedal rotated the pot control, allowing the guitarist to color the tone from treble to bass. It was a brilliantly simple circuit, a showcase for the potential of a simple potentiometer. And Plunkett built it into an effect that was as easy and intuitive to operate as a car’s gas pedal.

The use of a pedal was not intuitive to Thomas Organ, however. President Joe Benaron was certain it would sell to horn players, and called Clyde McCoy to license it as the Vox Clyde McCoy Wah-Wah Pedal. The earliest versions boasted McCoy’s likeness on the baseplate; later ones had just his signature.

Thomas Organ demonstrator/multi-instrumentalist Del Casher knew they had it wrong. “This is really a guitar thing,” he told Benaron. In March of 1967, he cut a demo 45 titled “Crybaby…” showing off the range of the wah from blues to jazz, sitar to a tiger’s growl.

The Cry Baby moniker was used on the first Thomas Organ wahs. Listening to the pedal scream, someone at Thomas said it sounded like a baby crying. The name became famous.

Both the Cry Baby and Clyde McCoy – followed by Vox’s V846 successor – went into production in early ’67, first in Sepulveda, then at Eko, in Italy. When Eko balked at building the pedal, Benaron and Italian foreman Ennio Uncini launched Jen (borrowing the first letters of their names) to make them. The pedals were the same inside.

In between, the wah was copied far and wide. There was the Targ & Dinner Cry-Baby Waa-Waa Pedal, UMI Electronics Wa Pedal, Jordan Gig Pedal, Dallas Arbiter’s Sound City Wah Face, Color Sound Wah-Wah, Rosac Nu-Wa Fuzz, Foxx Fuzz Wah, Maestro Boomerang, Electro-Harmonix Big Muff Crying Tone, and more, all of which signaled that the wah was an instant hit. Eric Clapton used it on Cream’s “Tales Of Brave Ulysses,” Hendrix on “Voodoo Child (Slight Return),” Jimmy Page on Led Zeppelin’s “Dazed And Confused.” By the late ’70s, wah was everywhere; it wailed through Isaac Hayes’ “Theme From Shaft.” Miles Davis played his trumpet through a Cry Baby on Bitches Brew. It was even on Bee Gees tunes, the theme for TV’s “Three’s Company,” and porn soundtracks. Use of the wah hit the saturation point, and it fell out of fashion along with bell bottoms. But as with most cool guitar sounds, it would come back.

The sound of the Cry Baby changed over time, due largely to different inductors used in its construction. The first models had a round, brown Halo inductor, often hailed as the best-sounding. That was followed by a bare-metal “film canister,” then plastic-covered Fasel in various colors, the square TDK, and a black-finished “stack of dimes” unit.

In the late ’70s, Vox and Thomas parted ways; in ’82, Thomas went under. Jim Dunlop astutely bought rights to the pedal and began offering his GCB-95 Original Cry Baby, soon followed by upgraded, hot-rodded versions and signature models. As of today, the Cry Baby just may be the best-selling pedal of all time.

Junior Marvin’s use of the wah was literally part of the effect’s exodus. Marvin and Bob Marley met effects wizard Roger Mayer at a New York gig, and Mayer became their tech. Marvin remembers, “He tweaked out the wah-wah pedals, and they sounded better. He gave them more high and lows, so the wah wasn’t so short. He really made them talk. He wouldn’t tell anyone his secrets, and I don’t blame him!”

Marley and the Wailers were booked into London’s Island Studios for a three-month session, 24 hours a day, seven days a week. The result of the marathon was Exodus and its follow-up, Kaya.

Jamaican reggae producers had a long history of studio experimentation, playing with echo and reverb, sometimes assembling two or three tapes to create delay. “European engineers would freak and go, ‘What are you doing? You’re not supposed to do that!’” Marvin laughs. “And they’d go, ‘Really? No one told us?’ They would do things by accident, things that were totally unheard of anywhere else in the world. They did things they thought sounded really cool. No one told them ‘Don’t do that!’ So they did it.”

While working on Exodus, Marvin felt more freedom in experimenting with the wah, given that reggae history. He recorded multiple tracks of wah guitar that were laid on top and woven in and out of each other.

“To play the rhythm on ‘Exodus,’ I muted the guitar strings, and with the wah, it would go wak-a, wah, wak-a, wah, wah, wah and they wouldn’t ring… When you wanted that bright, rhythm reggae sound, you’d turn on the wah-wah and put it on the treble, all the way down, and get that reggae chop sound. It’d really cut.”

Marvin played the rhythm riff on just four strings, and Mayer taped down those not being used, “So it was really clean, with just the harmonics of those strings. It was one of our little secrets.

“Sometimes, when I’d use the wah for the leads, I wouldn’t use the actual wah-wah itself: I’d pick a tone in that spectrum and use that tone along with a little distortion so you’d get that edge to it. Some people don’t realize that you can use a wah as a boost as well; it will boost your signal and also boost your tone.” 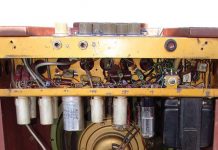