Because I don’t know what to call this Gibson guitar, I refer to it as a “Florentine,” for lack of a better name. Though the body decoration is unlike any cataloged Gibson guitar, the fingerboard and headstock ornamentation is almost identical to Gibson’s Florentine banjo (made between 1927 and ’37). In size, shape, construction and woods, it is identical to a late-’20s style L-1, but “L-1” seems inadequate to describe this instrument.

Perhaps we should call it a “Venetian.” It is a mystery why Gibson named its banjo after the Italian city of Florence and then ornamented it with scenes of Venice. Similarly, the companion banjo to the Florentine was described in the catalog as having “Spanish”-style ornamentation and yet it was called by an Italian name, “Bella Voce.”

In any case, the Italian nomenclature that began with these banjos has persistently recurred in association with the Florentine solidbody mandolin, for instance, or the “Florentine” and “Venetian” cutaway descriptions that today have achieved common usage even outside the Gibson line. I have no idea how or why the Italian names came about, but there is no doubt they have been effective.

In the late ’20s and ’30s, Gibson and many other manufacturers decorated guitar bodies (usually only the tops) with stenciled scenes or patterns over a standard finish, but this is the first guitar I have ever seen – Gibson or otherwise – that is completely hand-painted. Except for the bridge and binding, the top, back and sides are totally covered. The back of the neck is also painted, except for the area behind the first 10 frets, where the player’s hand would have rubbed away any paint, had it been applied.

The Gibson company was founded for the purpose of building carved-body guitars and mandolin-family instruments. The first Gibson flat-tops had slightly arched tops and backs. The GY (Army-Navy) model was introduced in December 1918, then the flat-top L-1 and L-0 were introduced in 1926. During the first five or so years of flat-top production, Gibson offered only the “L” series guitars (initially the L-0 and L-1, and then the L-2) and the Nick Lucas Special, with tenor and plectrum versions available in 1928. Originally, the L-series guitars all had the same rounded body shape adopted from their predecessor, the archtop L-1. A variety of bracing patterns, beginning with a classical-type fan bracing, was used during this period, as were a variety of bridge styles. By about 1931, all of the L-series guitars had been changed to a more elongated body shape, similar to that of the then-popular Martin 00-size guitar, and “X” bracing was standard.

This Florentine guitar has the early, rounded, L body style and the bridge is one of several typical early variations. The bracing pattern, characterized by an inverted “V” below the soundhole, is the immediate predecessor of the “X” pattern. The guitar has no serial number by which to pinpoint the exact date of manufacture, but the structural features indicate it was made in the late 1920s. It has a spruce top, mahogany back, sides and neck, a bolted-on bridge, 19 frets, and a 24-inch scale. It measures 13 5/8 inches wide and 4 1/8 inches deep. These features are typical enough of an L-1, but that is where the similarity ends.

I have seen custom Gibson guitars with rhinestone-studded headstocks, and of course, pearloid fingerboards are not unknown, the Century model being an excellent example. Gibson banjo ornamentation has often crossed over into guitar decoration. We have seen the rhinestone pattern on this guitar’s headstock duplicated on Florentine banjos, but it is much less common than the standard Florentine peghead inlay which looks similar to a floral bouquet. The fingerboard, on the other hand, is all but identical to that of the banjo, allowing for the difference in size. Tiny scenes of Venice, each with water in the foreground and clouds in the sky, have been etched into the pearloid at marker positions. Each scene was tinted, and a thin layer of lacquer was applied overall. The engraved, gold-plated tuners have pearl buttons and though they do not function any better than the standard, they are a cosmetic upgrade from standard L-1 tuners. 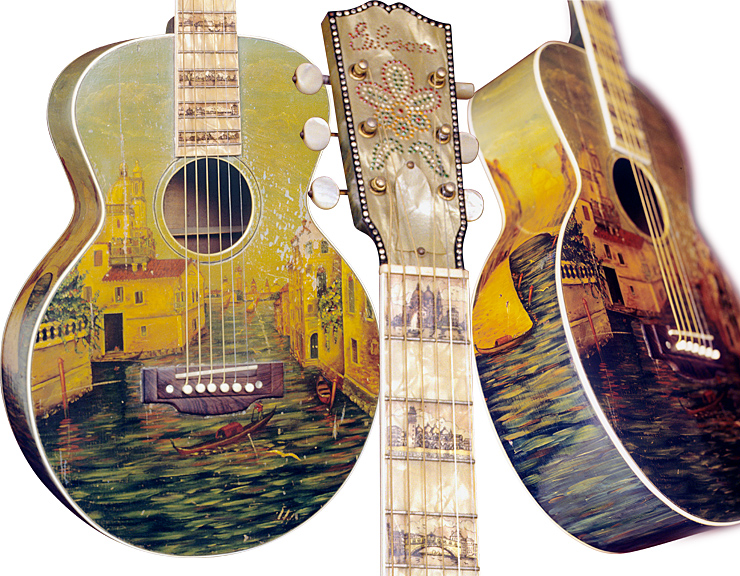 The guitar’s wood body appears to have been left unfinished for the paint to be applied. The painting was done in oil colors, applied with minimal physical texture, then lacquered over. Again, scenes of Venice were depicted. As is typical, the lacquer has yellowed with age and dimmed the color. A combination of yellowed lacquer and the fading of the scenes’ tint has reduced the fingerboard etchings to a sepia tone. In spite of this, the guitar is still very colorful. The fingerboard has blues, reds and yellows against white pearloid. Judging from the small spots where the lacquer has chipped away, the body was brilliant. Under the lacquer the sky is a bright “robin’s egg” blue and the water is an intense, deeper shade. An eye-opener even today, this guitar must have been spectacular when new.

The guitar may well be one-of-a-kind. I obtained it from a trader in Grand Rapids, Michigan. It seems a disproportionate number of non-catalog models are from close proximity to the Gibson factory. Perhaps it belonged to an employee of the Gibson factory or being close to the factory made it easier for folks to make their spacal wants known.

Though not at all practical from a player’s point of view, this is certainly a beautiful instrument. Although pictured with strings, it is not playable. The top crack visible in the upper bout is unstable, but repair might damage the painting. Also, you can see that playing has already worn paint off the top, next to the soundhole. The guitar is such a work of art that being limited to display doesn’t seem much of a limit at all. Many hours of work went into the decoration of this instrument, and that certainly has not been wasted. The guitar can still command the eye, if not the ear.