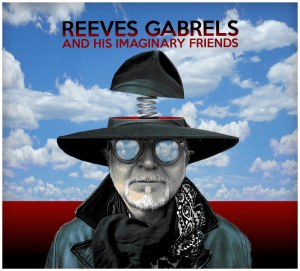 Guitarist, producer, and composer Reeves Gabrels is best known for his work with David Bowie and Robert Smith of The Cure. He’s taken a break from his role as a collaborator to release his fifth solo album.

Enlisting a group of real friends that include bassist Kevin Hornback and drummer Jeff Brown, this set is full of jagged blues covers, alternative rock, and irreverent sonic sculpting.

Gabrels’ signature over-the-top tonal saturation is in full-effect while providing clean cinematic soundscapes and textural panoramas. His artsy guitar feedback paintings are in sharp contrast to his honest covers of the blues gems “Bright Lights Big City,” “Messin’ With The Kid,” and “Who Do You Love.” But Gabrels is a rocker who rocks adeptly on the crashing “Zero Effect,” the power pop of “Drown You Out,” and the quirky ballsiness of “House Of Usher.”

High-impact riffs, cascading harmonics, and adroit soloing permeate this tight package along with Gabrels’ refreshing lack of self-awareness on lead vocals. His Imaginary Friends is a smart record with clever songs, tongue-in-cheek humor, and superb guitarmanship from top to bottom.