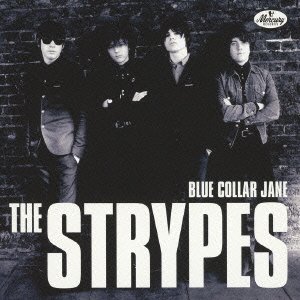 Here’s rock and roll like it used to be – ageless, timeless, and ready to count off again.

The Strypes are a quartet from Ireland, all just 15 to 17 years old, running on pure raging teen energy, Ray-Bans, and Clearasil. And they play wailing, howling, and strutting R&B with raw force. Yes, this is a boy band, but in age only, not inclination; it ain’t NKOTBSB, Justin Bieber, or One Direction. The Strypes’ music goes in both directions at once – rhythm and blues. They actually play and write it themselves, and their sound is as vibrant and powerful as if it was ricocheting out of the Cavern or Marquee clubs.

Listening to their debut U.S. EP, Blue Collar Jane, one thing’s clear – the inspiration of Howlin’ Wolf and Bo Diddley, maybe the Zombies and the Monks, for sure Doctor Feelgood and Dave Edmunds. But, they’re also fans of modern, retro-fueled rock including White Stripes and the Black Keys, and their sartorial sense is pure old-school R&B. It includes three hard-driving originals capped by a ferocious version of Nick Lowe’s “Heart Of The City.” The title track is an oldfashioned homage to a working-class girl, with requisite spelling-bee chorus. Singer Ross Farrelly’s vocals are tough and wise beyond his years (of course). The song swells into an out-of-control solo pitting overdriven guitar against blues-wailing harmonica. Guitarist Josh McClorey is babyfaced and mop-topped, yet with astonishingly good vintage chops; rest assured, he knows his double-stop licks and how to use them, and makes his sound on all the right guitars – Teles, Strats, Firebirds, ES-335s.

The Strypes have a debut album in England, but we’ll have to hold patient through the summer for it to arrive stateside.