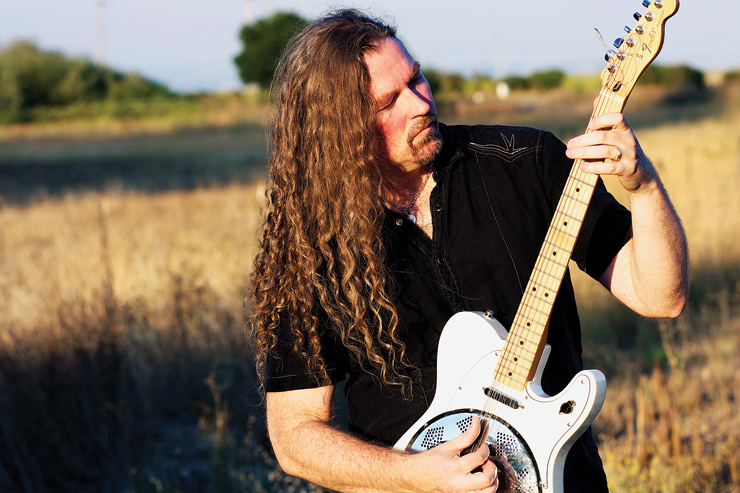 Michael Lee Firkins began his career as the ’80s shred era wound down and grunge began to boom. His out-of-the-box guitar style showcased a blend of country, blues, and hi-tech rock. His new release, a Southern-rock opus called Yep, was about a decade in the making, as other projects – even other albums – called him away from time to time.

Yep has so much flavor. Did you know what you wanted it to be when you started it 10 years ago?
I [always] wanted the same thing, I just didn’t know how to get there. Some of the songs got to grow, but I didn’t cut them up or rearrange them. The vocals were the most fun, and easiest, but I’d sit and look for great guitar tone, working on some new speaker and thinking, “I’m looking for AC/DC tone!” Then I’d press record and realize the song didn’t need that. I would mess around for a couple of days with a new amp and say, “Hey, here’s my new sound.” Halfway through the record, it wasn’t about sounds at all. It was about getting it done (laughs)!

Your playing style has changed slightly since the early ’90s. You’ve gone from imitating slide guitar using the vibrato to actually playing slide.
There’s some of that on this record; 50 to 75 percent is slide, the rest is whammy bar. My dad played lap steel, saw Speedy West in 1951, and ordered a lap steel right then. A lap steel and a Magnatone amp were in the house my whole life. But I didn’t put two and two together until 15 years ago, when I grabbed dad’s lap steel. That started me on slide guitars, lap steels, and resonators. One of my favorite guitars is an Oahu lap steel – that thing is just tone! It’s fun when you just plug in and get that sound. I still like the whammy-bar stuff and plan on doing tons with it in the future. On this particular record, I was set on making a rock-and-roll record.

Your first album made big waves, yet you slowly dropped out of the scene. What happened?
The ’90s was a lost decade for a lot of people, especially me. Though my first album was successful, it came at the end of the instrumental-guitar thing. I remember seeing myself in Yamaha ads in every guitar magazine, but when I got to Europe, the record company was saying, “Even Vai and Satriani aren’t selling well anymore!” (laughs) Everyone went to grunge.

Talk about your electric resonator.
I got a Johnson resonator and thought it would be nice to have one in a Tele-type guitar – it was just small enough to fit. I went to a guy who builds woodies – car doors, out of wood, not guitars – but the first two guitars he made were amazing.

What’s next?
Well, I don’t want to do any more records that take this long (laughs)! I’ve written hundreds of songs, so I want to record right away – walk into the studio with a band and record a song by the end of the night.