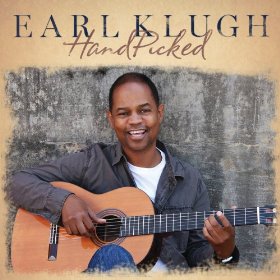 Thirty-seven years between his debut album and today, HandPicked, Klugh’s first new album since 2008’s The Spice Of Life, appears on his own label (distributed by Concord). Like his past few albums, Klugh offers a blend of standards and originals in a solo setting with guests on three tracks, starting with an elegant rendering of Burt Bacharach’s “Alﬁe.” A restrained “Blue Moon” becomes collaboration, with Bill Frisell playing ampliﬁed. Playing solo on “Love Is A Many Splendored Thing” and “But Beautiful,” Klugh delves into rich, almost Bill Evans-style harmonic explorations.

“Hotel California,” features him in tandem with Jake Shimabukuro’s ukulele. “Goin’ Out Of My Head” straddles its roots in pop (Little Anthony and the Imperials) and jazz (Wes Montgomery), Klugh again offering brief, thoughtful improvisational passages.

He offers a stately take on the Beatles’ “If I Fell.” Vince Gill joins in on guitar on the Everly Brothers’ “All I Have To Do Is Dream,” offering a brief vocal reprise. Klugh waxes mellow throughout, but the four minute “In Six” offers some lively, swinging moments.

Klugh’s approach has always tended to the smoother, albeit with a high level of consistency. HandPicked maintains that vision.