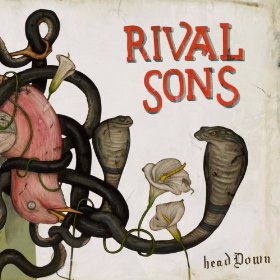 Bands that sound like they just walked out of a recording studio 40 years ago are practically a genre nowadays. While it can be argued that the Black Crowes have been doing this since the early 1990s, bands like Black Country Communion are going strong with vintage production values and riffs to match. Rival Sons’ second album, Pressure & Time, got a lot of attention because of the title track’s similarity to Led Zeppelin’s “Out On The Tiles.” The album’s ample use of Zeppelin, Stones, and Free inﬂuences was obviously a winning recipe that sent the band around the world.

Head Down appropriates those elements once again but has more to offer – a Yardbirds and Doors inﬂuence. Talented vocalist Ray Buchanan shows there’s more to him than a Robert Plant wannabe on the smooth-voiced “Wild Animal,” while reminding us that he can still scream on the rockers “You Want To” and “Keep On Swinging.”

The rhythm section grooves impressively, while the production really accentuates the sound of guys playing in a room together with long hair, muttonchops, and corduroy vests.

Guitarist Scott Holiday is a classic rock riff machine, churning out 1960s Brit rock goodies and awesome psychedelic blues slide on “Run From Revelation.” He generally steers away from epic long-term guitar wankage in favor of sizzling vintage accompaniment. The exception is on “Manifest Destiny Pt.1” where he brings back the acid-rock guitar solo.

There’s sweet mellowness like “Jordan” and “True,” with their “Going To California” acoustic vibe. It’s also a soulful record, where Buchanan really shines. There’s some great use of dimed fuzz tones, dreamy tremolo, and tasteful wah work, but you can’t help but feel like a marketing team is stalking you just because you own Led Zeppelin “IV.”