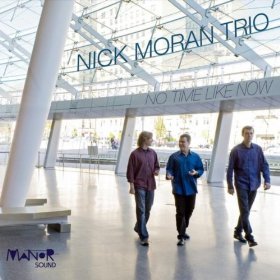 Moran and band are deﬁnitely an organ trio steeped in the tradition, but they aren’t afraid to mix things up a little. That’s immediately made clear on the opener, “Strange Brew.” Yes, it’s the Cream classic, and it’s the only non-original here. It’s deconstruction and reconstruction by the band works incredibly well. The funk wouldn’t sound out of place on a Grant Green record from 50 years ago.

From there we hear plenty of organ trio style tunes, including the funk of “Slow Drive” with some slinky soloing from Moran and the soul-meets-jazz of “Say Hi To Paris,” with its instantly hummable head and tail, and Moran’s funky, crisp soloing. In between, some roads are taken. “Intention” has a light, airy feel that hints at “new age” while keeping its jazz pedigree. “My Beautiful” starts with a slightly chorused descending line before a Latin feel moves in with Moran zipping through the changes with ease. He even turns on the distortion for a bit of a fusion feel on the bopper “Wishful Thinking.”

Organist Brad Whiteley proves to be the perfect foil for Moran’s soloing, supplying the bed for the guitarist’s always-interesting solos. Whiteley also proves no slouch in the soloing department, with imaginative and funky turns on pretty much every cut. Drummer Chris Benham drives the music, covering all the various bases that Moran’s compositions hit. He’s instantly swinging on the bop of “The Physicist Transformed” and has the perfect touch on the stately ballad “No Time Like Now.”

It seems like every year brings another half-dozen New York jazz guitarists who will be around for a while, and Moran is the latest to add to that list.