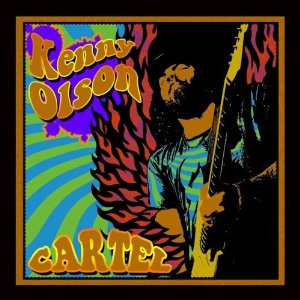 Think Detroit rock and roll – the MC5 and Iggy by way of Ted Nugent and Kid Rock: gear-grinding rock with plenty of volume and aggression. Throw in some Hendrix, Guns N’ Roses, and even some SRV. That gets you close to describing the antics of Kenny Olson Cartel.

Olson formed the Twisted Brown Trucker Band in the mid ’90s, backing Kid Rock, and has also led several bands of his own – the Flask, Motorﬂys, and the Seven Day Binge. Along the way, he has played on tracks by a range of artists from Run-D.M.C. to Les Paul, Chaka Khan to Hank Williams, Jr., and the Experience Hendrix Tour. Even Keef called him “one of the best rock guitarists on the scene right now.”

The Cartel’s 12-track debut kicks off with the rousing “Loaded” – and a healthy dose of fun. Olson blazes away on a roaring introduction solo before the sound of a skidding car halts all progression, transporting the band into the ﬁrst verse. Cool.
Olson also gives nods to his heroes. “Water” salutes Stevie Ray Vaughan’s Texas blues while “Away We Go” resonates with a Hendrix vibe. “Left Sock” is fun funk, and “Rebel With A Cause” is a tremolo-soaked electric blues with sleazy guitar licks and swampy wah riffs.