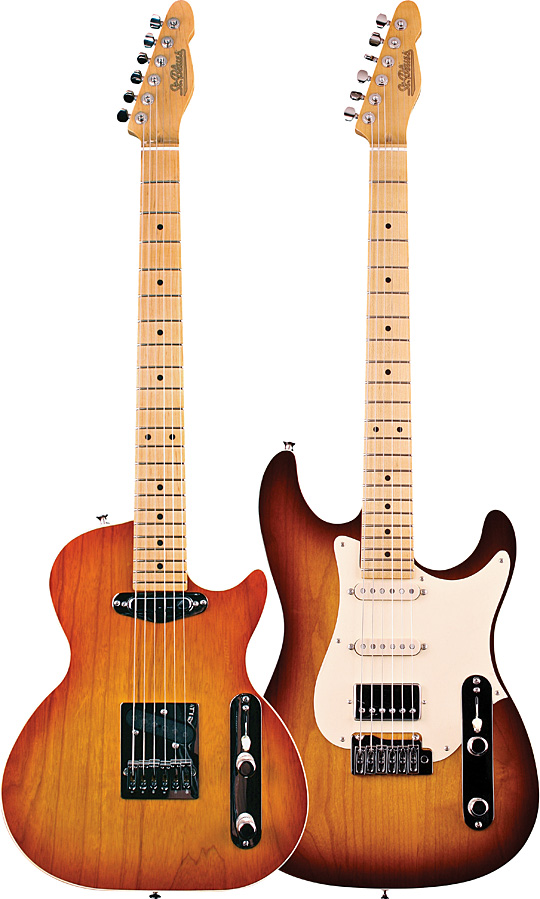 St. Blues’ history stretches back to the days when its founders customized guitars for the likes of Jimmy Page, Billy Gibbons, and Duane Allman as their tours passed through Memphis. Today the company has a storefront just a few yards from the legendary Sun Studio, and in a nearby factory builds their top-of-the-line Workshop Series, which includes the Bluesmaster and Blindsider models.

The Bluesmaster is St. Blues’ cornerstone design, first created by merging elements of an Esquire and a Les Paul. The unlikely pairing yielded a real looker; the slightly undersized body features soft curves and a squared-off tail, with a bolt-on maple neck (available with maple or pau ferro fretboard). The model sent for our review had an ash body with a gorgeous Honeyburst finish (also available in Tobacco), which St. Blues lacquers with six to 15 coats coats of nitrocellulose. At about 71/2 pounds, and well-balanced for playing while seated or standing, a Bluesmaster is more comfortable to hold and play than either of its predecessors right out of the box.

Despite the mixed heritage, the feel, tone, and electronics of the Bluesmaster are unmistakably from the Tele school. A three-way pickup selector controls a pair of Lollar pickups, with coil cuts available on the push/pull volume and tone knobs. These Lollars are a great match with the Bluesmaster since both preserve some of the best features of classic guitars while providing the refinements of a boutique design. Played clean through a 33-watt tube combo, both pickups offered lead tones that were round and buttery, with a big bottom end and excellent string separation allowing every note in a strummed chord to be distinguished. For more overdriven sounds, the neck pickup drove the amp a little harder than the bridge, which is fitting for a guitar with a tonal sweet spot in the mid-to-low range and highs that never get too brittle or biting. With a rich bottom and soft top, the Bluesmaster tone is more in the range of an Arlen Roth than, say, Roy Buchanan, though with the coil cuts and a nice throw range on the tone pot it’s not at all difficult to dial in a tone with teeth. Also, hybrid-picking players, in particular, will appreciate how the Bluesmaster seems to have a bit more range available for right-hand dynamics than most guitars do; even after hitting that compressive Tele slap, there remains headroom for harder or softer attacks. On balance, this guitar captures the finer qualities of a high-end Tele while throwing off the clunkier physical and tonal aspects of that workman’s axe. The Bluesmaster is a class act.

Like the Bluesmaster, the Blindsider plays beautifully. It’s shaped more like a Strat but without the rounded edges, save a rear contour cut on the upper bout for comfort. The maple neck is available with maple, Pau Ferro, or rosewood fretboard, and the alder body can be finished in Honeyburst, Blueburst, or Tobacco. A distinctive design choice on the Blindsider is that the five-way switch and the knobs for volume and tone are housed in a Tele-style control panel rather than in the pickguard, which lends a nice hybrid touch. The model we tested had a “super strat” setup – two Vintage Blackface single-coils and one Imperial Humbucker from Lollar – though the guitar is available with three Lollar singles (St. Blues also offers the Blindsider outfitted with pickups from Lindy Fralin). The bass and middle pickups are wired together and the push/pull cut on the tone knob splits the humbucker into a single coil, multiplying the tonal possibilities on what is already a very diverse guitar.

We could hardly take our hands off the Blindsider’s neck, which was flawless from the nut to the 22nd fret and had an accessible higher end that allowed unobstructed chording on inside strings even way up at 18th position. The uniform resonance of all six strings, evident when playing unplugged, contributed to the Blindsider’s complex overtones and impressive sustain when amped. Between the pristine neck and the Lollars, the guitar was uniquely responsive to nuances from both hands. The trem system is tightly sprung, and demands a little technique to get a nice waver going; this is no whammy bar for greasy kid’s stuff. We found that when the arm was pulled upwards, all strings remained sharp by a few cents after the bar was released. But without rear routing this trem’s intended range is all downwards from pitch, and following a down-scoop with the arm we were back in tune.

Both of these Workshop Series guitars feature a 25.5″ scale, six-on-a-side Sperzel tuners (locking tuners on the Blindsider), genuine bone nut, Jescar medium-jumbo frets, Dunlop strap buttons, Bourns pots, ABM bridge (strings-through), oil-filled caps from Mojotone, nickel-plated hardware, and an electrosocket jack mount. Each guitar comes with a form fitted, custom case from TKL.
For an extra shot of fun, St. Blues also sent us a four-string Delta Blues Box, which president Bryan Eagle says was initially produced on a lark after a trip to the Juke Joint Festival in Clarksdale, Mississippi. Tuned to open G and ideal for sliding, this featherweight box has a dark and gutsy piezo tone and is more fun than a bottle of moonshine. The narrow, flat-back neck makes it a great starter instrument for young players, if you could bring yourself to hand it over, and is also available in a three-string model with dulcimer fretting (no sharps or flats).

With these cigar-box guitars, St. Blues threads the needle on the low-cost guitar market and stays true the company’s genuine Delta roots – without sacrificing the high-class craftsmanship that marks St. Blues’ full-bodied instruments.