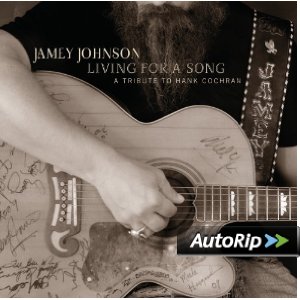 Like earlier country outlaws, Jamey Johnson forges his own paths while never forgetting his forebears. One is singer-composer Hank Cochran, who died in 2010. A giant among Nashville writers, Cochran wrote many tunes over nearly half a century, some now country standards. Having worked with a prerocking Eddie Cochran (no relation) in the early ’50s, he settled in Nashville in 1960. Among his earliest friends: singer-songwriter Willie Nelson, just in from Texas.

On 15 of the 16 tracks here, Johnson’s joined by others, many of them Cochran’s friends and peers. The band, largely bare bones, keeps voice and lyrics dominant. Brent Mason handles most lead guitar, with Steve Gibson on three tracks and Tommy White doing most pedal steel work.

Emmylou Harris guests on “Don’t Touch Me,” a ’60s hit for Cochran’s thenwife Jeannie Seely. Cochran fan Elvis Costello is the guest on “She’ll Be Back.”

Johnson pairs with George Strait to revive the 1991 Waylon Jennings hit “The Eagle,” backed by ex-Jennings steel guitarist Robby Turner. Bobby Bare revisits “I’d Fight The World,” a hit for both Jim Reeves and Cochran himself. Other guests include Kris Kristofferson, Asleep at the Wheel, Vince Gill, Leon Russell, and Lee Ann Womack. The title song, a life summary, features Cochran’s voice with additions from, Kristofferson,

The Hadden Sayers Band – Swingin’ From The Fabulous Satellite