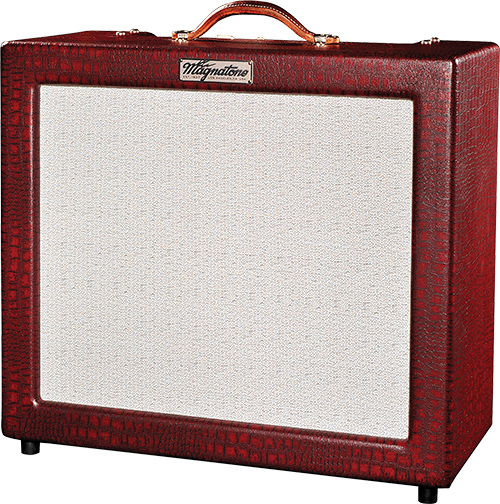 Magnatone earned a cult of admirers in the mid 20th century. Buddy Holly and Lonnie Mack used the company’s amps, and Neil Young still has a 280 Stereo model in his live rig. The company went out of business in the ’70s, but the beloved name was recently revived by industry veteran Ted Kornblum, of Ampeg and St. Louis Music fame.

Unlike complex three-channel tube heads with innumerable knobs and switches, the Varsity has three knobs and one tone-altering switch – that’s it. It’s wired with 15 watts of push/pull Class A circuitry (which, in a nutshell, means it has old-school tone, like a vintage one-channel amp). It has two 12AX7 preamp tubes, a pair of EL84 power tubes, and a GZ34 rectifier tube that converts wall-socket AC power to the DC power that fuels the preamp and power-amp sections.

Other Varsity goodies include the aforementioned Volume control, along with Treble and Bass knobs, two input jacks (High and Low sensitivity), a Line Out, and another jack for an 8-ohm extension cabinet. The speaker is a Magnatone Custom 12″ ceramic-magnet, with a Celestion Blue Alnico as an option. There’s also an negative-feedback (NFB) switch that is essentially an 8-dB boost/cut that helps the amp render bigger, punchier tones or a cleaner sound with fewer artifacts.

The Varsity’s cabinet is solid pine with black or burgundy faux crocodile covering. There are also options for TV-, arch-, or cathedral-style grille frames. Our tester was burgundy with the cathedral front, and with its gold-anodized control plate, vintage fonts, and chicken-head knobs, it was a sweet retro looker.

Using a PRS Starla and a Fender Classic Series ’70s Stratocaster, neither of which has particular high-output pickups, the first obvious trait we gleaned from the amp was its rich, fat bottom end. This is a key factor for discerning good combo amps from bad, and often an important variable in 1×12 cabinets. The Varsity’s tone benefits from its wider cabinet, which allows for a beefier bass spectrum and absence of the boxy tone common with smaller 1x12s. The amp displays a lot of the colors that guitarists prefer in a tube amp – big bass, a glassy (but not screechy) top end, a bit of natural compression, and notes that have that sense of tubular responsiveness and “sag.” It’s a vibrant sound, rich with flavors and possibilities. The NFB switch re-wires the amp’s output and, in the boost (+) position, delivers bigger, more-open rock sounds like AC/DC or the Texas blues/roots band of your choice. To our ears, it even sounded like a second layer of guitar tone, as if you are overdubbing in real time. With NFB in the cut (-) position, the Varsity heads more in a Jimmie Vaughan or Ronnie Earl direction – still beefy, but without getting into hard-rock territory. Players will also be surprised how loud the Varsity is; it’s a loud 15 watts. The amp is ripe for adding an overdrive pedal to the front end for a more powerful overdrive. And, without a reverb circuit, it seems ideal for players with favorite stompboxes to integrate with their rig.

Aside from great tone and super-sexy looks, one of the best features of the Magnatone Varsity is its weight – a mere 33 pounds, thanks to a smaller transformer. In an era when 50- or even 75-pound tube amps are not uncommon, this is a highly attractive feature for the gigging guitarist.

At the end of our tests, it was clear that the Varsity is a terrific tone machine for the home guitarist, studio cat, or club veteran, and lives up to the Magnatone “less is more” reputation with flying colors.