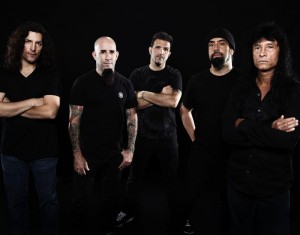 Anthrax has issued an open letter to fans, expressing gratitude for what it calls “one of the best years of our career” following last September’s release of its latest album, Worship Music.  The letter reads:

“To our Fans and everyone who has supported Anthrax and Worship Music:

“It was a little more than a year ago – September 13, 2011 – that Worship Music was released, and all of us in Anthrax can’t believe how much has happened since then.

“Our friends in the press gave the album great reviews, and so many writers singled it out as one of the best metal albums of the year.  Our label just told us that Worship Music has just passed the 100,000 mark on albums sold.  Since Worship Music‘s release, we’ve played 107 concerts all over the world – in the U.S., Canada, Europe, Japan, Russia, South America, and the U.K. – we’ve gone home to New York to not only play Yankee Stadium as one of The Big Four, but had September 14 named Anthrax Day in The Bronx, where Charlie, Frankie and Rob grew up.

“We’ve been so lucky as a band, and we know we’re able to do what we do because of you, our fans and all of our supporters in the press, at radio and retail, online, on the road, everywhere.  We’ve had one of the best years of our career, and we share it all with you.  So thank you for making the Anthrax’s ‘year of Worship Music‘ the best!  More to come!