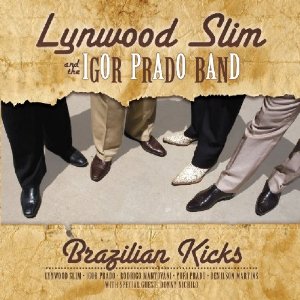 Despite its title, this is a batch of West Coast jazz-inflected blues – not some form of South American music. The title comes from Lynwood Slim’s band, which hails from Brazil; guitarist Igor Prado, drummer Yuri Prado, saxophonist Denilson Martins, and bassist Rodrigo Mantovani are skilled blues players who provide Slim with some of the finest backing he’s had in years.

Slim delivers his usual fine vocals and harmonica, but Prado is the soloing hero. Whether it’s short, tough solos like on “Shake It Baby” or the sophisticated jazz-blues work on “My Hat’s on the Side of My Head,” Prado serves up soulful and on-the-money solos and rhythm work.

Two instrumental cuts show the band’s versatility. The aptly titled “Blue Bop” is a stomper on which Prado lets his jazzy side shine, while “Bill’s Change” is a straightforward horn-driven swinger that allows him to do the same.

And Prado stays away from blues clichés. On “Bloodshot Eyes,” he opens a blistering solo using jazzy chords before plunging into single-line bliss.

In the liner notes, Slim points out the maturity and sophistication of the band, and one listen will have you believing you’re dealing with savvy veterans. But Prado was just 24 when the disc was recorded. Given his mastery of various blues styles, we should be hearing from him for quite awhile.